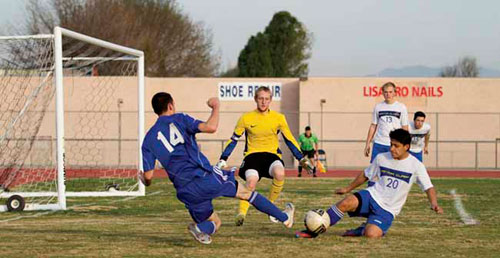 On the afternoon of February 1, the Santa Clara Bruins boys’ soccer team looked to build upon their season’s success and retake first place in the De Anza Division against the Los Altos Eagles. With the Bruins clinching a CCS berth as of January 30, they looked to ride their hot hand in hopes of obtaining a higher seed for the tournament. But with multiple injuries to the team, defeating the Eagles would come at no easy task.

Los Altos was in better form at the beginning of the match, as they were able to hold possession on Santa Clara’s end for a good portion of the first half. The Bruins, however, did have the first real chance of the match, as a low cross came in for Emmanuel Hamzat (’13). Hamzat struck a no-look shot off the back of his heel only to be saved by the Eagles’ keeper, holding the score at 0-0.

As possession swung back in Los Altos’ favor, they were able to break down the Bruins’ defense and strike for two goals in a matter of minutes. Bruins Coach John Azevedo suggested the clinching of CCS had actually set them back. “The boys had clinched Wednesday and a number of players were not in rhythm at the start of the game. In this league you cannot afford to be a step off, as the other team will capitalize on it.”

The Bruins form would pick up, though, as Hamzat would not be denied a second time. With a gorgeous through ball sent in from Calvin Skewes (’13), Hamzat made a nice run into the box with a superb first touch, chipping it over the keeper’s head for the goal.

Shortly after, the Bruins’ defense was able to feed off the offense’s success and step up their game, making strong tackles on Los Altos’ runs. Keeper Derek Eszlinger (’15) also made some key saves in Santa Clara’s efforts to tie the game.

With minutes left in the half, the Skewes to Hamzat connection would strike again as the latter received a cross in the box to head it past the Eagles’ keeper, for his second goal of the contest and to tie the game at 2-2.

With not many chances for either team in the second half, it was anyone’s game to win. Late in the match, the Bruins defense took a penalty in the box, giving Los Altos a chance to take the lead on a penalty kick. “It was a lack of focus,” Azevedo said. “He should have stood up the player, but went for the challenge and lost.” The Eagles scored, giving them the late lead.

As the match wore down, the Bruins had ample opportunities to tie the game, as they were awarded multiple free kicks just outside the box. They were unable to capitalize, though, ultimately falling to the Eagles 3-2 as the final whistles blew.

The Bruins’ next game is February 13th at Santa Clara High School.