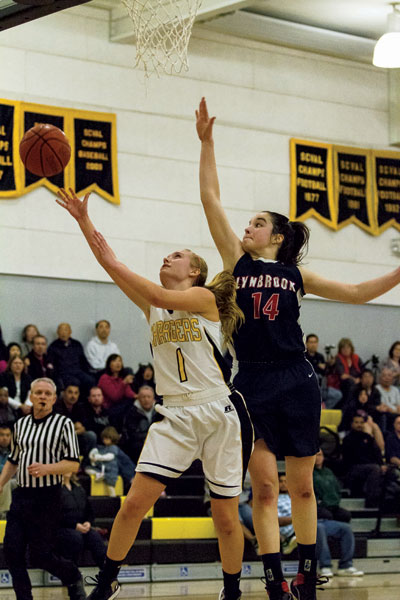 In their second, and final matchup of the season against the Lynbrook Vikings, the Wilcox Chargers girls’ basketball team was determined to exact revenge for their previous 44-36 loss against the Vikings.

As the teams tipped off last Friday night, Lynbrook came out shooting the ball extremely well. Paige Song (’14) hit some early three-point field goals getting Lynbrook started with a 10-2 run, even with Wilcox contesting most of their shots. “We knew they could shoot from the outside as every team in our league can,” said Wilcox Coach Kevin White. “Our goal is to contest every jump shot. We did a decent job of that. Lynbrook simply shot well.”

Once Wilcox switched to a 2-3 zone, however, they forced Lynbrook into bad passes, resulting in better offensive chances for the Chargers. White explained the decision to move to a 2-3 zone, “We find [a 2-3 zone] really disrupts teams to the point they are not really sure what we’re doing. We usually end up with three or so passes thrown away before we even defend.”

Behind the strong play of Center Joseta Fatuesi (’14), Wilcox ended the quarter on a 15-3 run, giving them the lead 17-13 as the buzzer sounded.

Caitlin Brown (’14) was able to extend Wilcox’s lead as the second quarter began with a three-pointer, but Lynbrook’s good outside shooting and penetration was able to keep them in the game. The only blemish for Lynbrook was their defense against Fatuesi, as she was able to score every time she was given the ball down low. As the half ended, Wilcox found themselves up 35-28 riding the hot hands of Brown and Fatuesi.

With the second half underway, Brown continued to catch fire from beyond the arc, giving Wilcox their first double-digit lead of the game. The Charger’s defense really began to hunker down, forcing almost all of the Lynbrook’s shots to come from outside the paint. As Lynbrook began to lose its shooting touch, Jessica King (’14) and D’airrien Jackson (’15) were able to clean up the boards on the defensive side, allowing Wilcox to extend their lead as they entered the fourth quarter up 55-37.

The Chargers continued to play well on both sides of the ball during the final quarter of play. Wilcox’s Point Guard, Shania Ratliff (’14), “ran the offense to perfection” according to White, as she was able to make crisp passes to her teammates for easy buckets while also penetrating the lane tallying some points of her own. As the Chargers took a 65-47 lead with just under four minutes remaining, it became a fouling match for Lynbrook, their only option to get back in the game. Their strategy was thwarted though, as the final buzzer sounded. Fatuesi had 28 points while Brown chipped in 20 of her own, helping Wilcox earn the victory by a final score of 77-58.