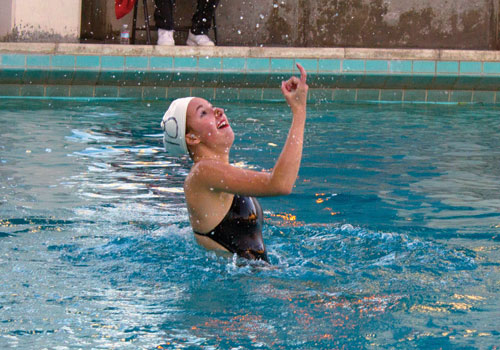 Each of the eight juniors automatically qualified for the second round, and six girls competed at both the junior and senior level. Seven (six juniors, one senior) Aquamaids battled with the remaining 29 senior competitors, which included London Olympians Mariya Koroleva and Mary Killman, for the 10 positions that would advance to the next phase of qualification for the World University Games and FINA World Championships.

“Everybody in the junior phase will move on automatically no matter how they do to Phase Two which is our Junior Championship in April so they have to compete here and they have to compete there,” said Betty Hazel, international relations committee chair for USA Synchro and FINA (Fédération Internationale de Natation) “A” judge. “With the seniors, we will be making a cut. We will announce the top 10 who will move on to Phase One B which is in March and they will compete with the World University Games team that’s named in March to be named to the World Championship team.”

In the junior division, the girls were asked to perform “figures ” – technical skills required for synchronized swimming. The judges were looking for movement competency as well as smoothness of transition between skills.

“It’s judged on accuracy of position,” said Hazel. “Each of the positions are defined in our manual and so they’re looking for how vertical you are, how smooth you can do that, how good your extension is because you want to have the long, sleek line. You’re looking at if they’re doing a split figure – how flat their position is to the surface. How high you are out of the water, how extended you are and how accurate you meet the description of the figure.”

The seniors performed a solo technical program on day one, requiring them to traverse the length of the pool twice in order to complete the routine. On day two, the performers were put into groups of three or four and asked to perform the same routine in sync with their competitors.

“I’m the one that will decide who will swim in the groups and I base that on the results and who I’d like to see swim with each other and I don’t tell anybody how I put the groups together, but the rules say and our procedures say that I cannot put any more together than four in a group, and I rarely do that because it’s very difficult as a judge to try to give a score for each of those people because you have to score each girl in the group so if you get a lot of people in the group it becomes really hard,” said Hazel.

Additionally, in what’s considered the first step in the Road to Rio, two-time bronze medalist and former Aquamaid Alison Bartosik along with her former coach, Chris Carver, gave a 15-minute talk on her experiences, trials, and lessons in synchronized swimming.

The next round of competition for the juniors will be this April in Greensboro, North Carolina. The seniors will compete at Stanford in March.