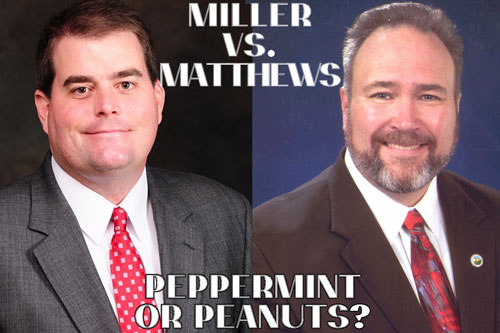 A friendly wager between the mayors of the cities where NFC Championship contenders — the San Francisco 49ers and Atlanta Falcons — have their headquarters and training facilities is lining up Santa Clara, California against Flowery Branch, Georgia.

Both mayors have also agreed to wear the opposing team’s jersey to the next City Council meeting if the local team loses.

“It may seem ironic to send ‘peanuts’ to Georgia, but I don’t think Flowery Branch is going to get the gift. Like Lucy, the 49ers are going to snatch the ball away from the Falcons and take it into the end zone,” said Mayor Matthews. “I’m looking forward to doubling the pleasure and doubling the fun of the Super Bowl with a victory stick of Wrigley gum.”

Mayor Miller expects a different outcome on the scoreboard. “Santa Clara will have a lot to chew on when the 49ers lose on Sunday, but it won’t be with our gift of gum. We may be known for southern hospitality, but the 49ers are not going to like the welcome they receive on the field of the Georgia Dome.”

Although the mayors disagree about the outcome of the game on Sunday, Jan. 20, both claim that their communities are where the teams do the hard work that brought them to championship level and that they should share in the victory celebration with bragging rights.

Santa Clara, about 40 miles south of San Francisco, has been the home of the 49ers headquarters and training facility since February, 1987. The 49ers new stadium is under construction in Santa Clara and scheduled to open for the 2014 NFL season.

The headquarters and training facility of the Falcons is located in Flowery Branch, a 45-minute drive from Atlanta.

Bruins One Man Show Not Enough Against Powerful Pioneers