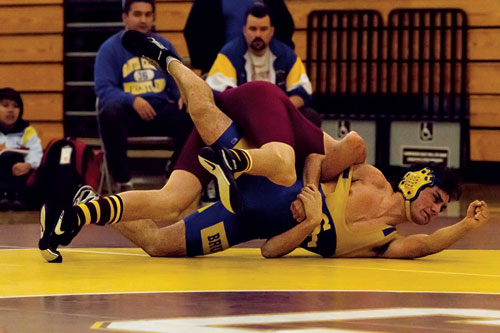 Last Thursday night, the Santa Clara boys wrestling team took to the mats against the Cupertino Pioneers. After the JV wrestlers gave Santa Clara a 13-0 lead, it was time for the varsity team to strap on their headgear and fight their way to victory. Sadly, the Pioneers came to wrestle, too, and would not go down easily.

As the varsity portion of the meet got under way, the Pioneers looked quick and strong. Every time Santa Clara showed a glimpse of taking control on the mat, Cupertino would score an escape point and immediately get another take down. Three of the first four matches ended with pins against Santa Clara while the fourth was valiantly fought by Danny Chavez (’16), who ended up losing after three rounds due to points, putting the Bruins down 29-13. It would not get any easier from there.

The next three matches were forfeited by Santa Clara in the 220-pound, 195-pound, and 182-pound classes due to the lack of size on their roster. “This year, just in forfeits, we would have to give up 24 to 30 points off the start each dual meet so it does make it hard to win,” said Assistant Coach Nick Garcia. “Honestly, wrestling is a tough sport physically but more so mentally than anything…we usually would start off with almost a full line up in the start of the year, but kids would quit after a week or two.” As the Bruins were only able to fill out eight of the 14 weight classes, this pitted them down 47-14 against the Pioneers.

There was one bright spot for Santa Clara, however.

In the first of the final two matches, Elvin Labucay (’14) absolutely dominated for the Bruins at the 115-pound weight class. The flashy Labucay scored multiple points in the first round by takedowns before the Pioneers sent him to his back in the second. With ease, however, the Santa Clara wrestler rolled out, scoring an escape point before finally pinning his opponent in the third, bringing the score to 47-20.

The final match looked to be going Santa Clara’s way as Mark Santiago (’13) had numerous opportunities for takedowns with his roll-through-tilt move. After a couple of failed attempts, he finally got his opponent down. About five seconds later, though, Santiago and the crowd were stunned as the Pioneers earned a pin. “He did not realize that when he had his opponent on their back, his back [shoulders/shoulder blades] were flat on that mat. So he pinned himself while trying get near fall points, which are exposing your opponents’ back to the mat without being flat on the mat,” Garcia explained. “And, yes, it does happen from time to time. All he can do is learn and move on.”

The final score was Cupertino 53, Santa Clara 20. See if the Bruins can bounce back in their next match against Homestead, Thursday, January 24th at Santa Clara.