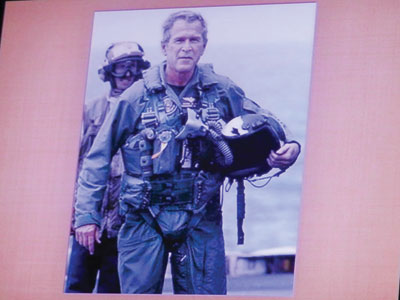 In 2003, President George W. Bush, dressed in a flight suit, landed on the deck of the USS Abraham Lincoln and, standing in front of a “Mission Accomplished” banner, declared major military operations in Iraq were over. The speech was less about the actual accomplishment of any mission and more about the symbols behind the act.

“That was a political statement,” said Triton Museum of Art Chief Curator Preston Metcalf February 9 during the fifth Hidden Symbols of Art lecture on Symbols of Politics and Power. “That was showmanship. He didn’t need to show up in a jet. He didn’t need to have this military uniform, which by the way, carried the presidential seal, and yet he did. It was staged. And, at the time, it did project the image that his staff wanted to project. It was very successful at that time.”

These are the symbols of politics and power. The presidential seal? It’s a symbol. The coins we use? A symbol. Everything has meaning. “Some politicians wanted to project something more personal. They wanted not just their office to be a symbol of power, they wanted their own image to be a conveyance of power.”

However, occasionally the symbols are a lie. Such is the case with Gaius Octavius Thurinus (Augustus). Augustus designed his own image – starkly different fom the way he actually looked. In images of Augustus, “he’s got symbols of protection and peace,” said Metcalf. “He’s got the staff of peace and he’s got the breastplate of a general. He never fought in a battle…Cupid is down at his feet. Cupid was a god…Augustus? He’s no god but Cupid plays down at his feet just the same…He’s not a god but the gods like him…He’s got the symbols of the orator looking up and he’s got bare feet…The pair of feet symbolizes standing on Terra Ferma, Mother Earth, the Earth goddess, and therefore, when you commune directly you become at-oned with it, you become ‘at one’ or ‘atoned’ and you are, just by osmosis, deified. He’s no god, but he made sure his symbol that was reproduced everywhere had all the symbols of the gods.”

“Now that’s a lie,” continued Metcalf. “I don’t mean the religious aspect. I mean this idea that Augustus was humble; that he was a peace-keeper; that he was conservative. He was none of those things! He was an arrogant, brawling little brat his entire life! He was lascivious; he was corrupt. Oh, he was a great leader, there’s no doubt about that. If you can separate his personal failings from his statesmanship – he was a great statesman, but this was a lie. Furthermore, he was still producing this image when he was nearly 90 years old. He didn’t look like that! In fact, Augustus never looked like that. Augustus Octavian was a scrawny, sickly, thin-reeded figure. He was never an opposing figure at all. It didn’t matter. What mattered was the image.”

Images, or symbols, are seen on a daily basis and the images are everywhere. Everyone sees the same symbols – whether it’s the president portraying the image that his administration will protect the people or the image that Augustus was a powerful god-like ruler.

The problem? Not knowing what the symbols mean can be society’s greatest downfall. “If we don’t know the symbols, we are unprepared to understand how the art is being used,” said Metcalf.

The lecture series continues with Symbols of Love and Marriage tomorrow at 7 p.m. Drop in fee is $20. The Triton Museum of Art is at 1505 Warburton Avenue in Santa Clara. Additional information can be found at www.tritonmuseum.org.