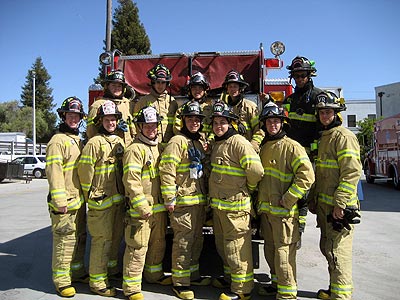 If you like to play with fire, the city of Santa Clara has the perfect volunteer job for you. However, there’s a caveat.

You must be able to position and climb a three-story ladder wearing 75 pounds of gear, chop holes in a slippery rooftop with a flathead axe in a cloud of smoke, and wrestle a 1 3/4-inch hose with water flowing out at 150 gallons per minute/ 100 pounds per square inch. And those are just a few of the challenges of being a firefighter in the Volunteer Reserve Division of the Santa Clara Fire Department.

“There are no limits to the firefighter’s job. They have a large tool box, the fire engine or truck, and have to use those tools to accomplish any and all situations they may encounter,” says Emergency Services Deputy Fire Chief Augie Wiedemann.

Wiedemann is in charge of the 60 volunteer firefighters—all Santa Clara residents—who beef up the ranks of the City’s 133 paid firefighters and contribute 10,000 volunteer hours annually. Those who make the grade and become certified fall into two categories.

Perhaps 60 percent hope the experience will put them in line for a paid position somewhere. The others, like Dave Stiver, are content to be highly-trained volunteers. Stiver balances his prized job as a Google engineer manager with the adrenalin rush of action as a reserve firefighter.

“This is the best job I’ve ever had that I never got paid for,” says Stiver. The nine-year volunteer is captain of Hook and Ladder Company, one of six, ten-person volunteer hose companies. “I like the intensity of it. There aren’t a bunch of meetings. You train and respond in an intense manner. You train, practice, and keep practicing to take the risk out. It’s a simple way to help people.”

Jon Hemenez, on the other hand, hopes for a career as a firefighter. He moved his family to Santa Clara to be eligible to volunteer. He is a hands-on person who runs his own business as a swimming pool service contractor and sees firefighting as “a way to give to the community.”

“There’s a lot of satisfaction in helping another person at a low point in life,” says Hemenez, captain of Tanner Hose Company. “You’re putting your life on the line to save someone else.”

The volunteers are on call for all fires, switching at a pager’s alert from their normal, daily roles to that of a firefighter. Some keep their firefighting protective gear, loaned by the City, at the ready in the trunk of their cars.

“If you have the ability to respond to a call, you do, but you’re not obligated,” says Hemenez.

“Their unselfish, positive and giving attitudes support the motto of the Santa Clara Fire Department, ‘Service without Limits.’ I am personally and professionally inspired by their dedication and commitment to serve the community 24 hours a day, seven days a week,” Wiedemann concludes.

Administrative Deputy Fire Chief Bill Kelly, who has served the City for 26 years, began his career as a volunteer. If you, too, take playing with fire seriously, check online information at http://santaclaraca.gov. Go to Departments then Fire. Click on the Volunteer/Reserve tab and also the FAQs tab. Or call (408) 615-4900. You may also want to check out Mission College’s Fire Protection Technology Program, http://www.missioncollege.org/depts/fire/index.html.