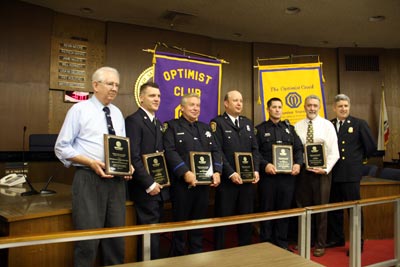 Jake Thompson began his law enforcement career in February 2001 as a Correctional Officer for the Santa Cruz County Sherriff’s Office. In April 2008, he became a Santa Clara Police Officer and has since distinguished himself as a hard working, smart, veteran officer.

Jack Mastilock has proudly served as a Reserve Police Officer for almost 39 years. He was hired by former Police Chief Manny Ferguson in October 1972.

Zach McGhie joined the Volunteer Reserve Division of the Santa Clara Fire Department as a Firefighter in 1998 and was hired as a paid firefighter by the City on October 5, 2001.

Gail Carter joined the Volunteer Reserve Division of the Santa Clara Fire Department as a firefighter on March 5, 2008. Last year he was promoted to the rank of Lieutenant and is assigned to the Hook and Ladder Company. In the past three years as a member of the Volunteer Reserve Division, Gail has continuously demonstrated a positive attitude, a strong work ethic, a high degree of integrity and a dedication and commitment to the Santa Clara Fire Department. Chief Wiedemann has commented on many different examples where Carter demonstrated strong and positive leadership skills to the other members of the Volunteer Division.

On the morning of June 20, 2010, Firefighter Carter was completing some errands when he noticed a group of adults screaming for help for a 2-year old child who was turning blue, not breathing and in the arms of his mother. Gail quickly determined the child was choking and provided multiple Heimlich maneuvers until he was successful and the child gasped for air, began to forcefully cry and his skin pinked up; all of which are extremely good signs. The Fire Department Paramedics arrived on scene shortly afterwards and credit Firefighter Carter with saving the life of this child.

John Mills has served the City of Santa Clara for the last thirty-two years in the Dispatch Division of the Police Department. May 30th will be his 33-year anniversary. John began his career as a Communications Dispatcher and worked his way through the ranks to become Operations Manager twenty-one years ago.

Bob Gundrum, on behalf of the Fire Associates of Santa Clara Valley

Community Public Safety
Author Carolyn SchukPosted on July 1, 2022
Suppose tomorrow morning you woke up on another planet where people looked like you, but their thought processes and behavior were completely foreign to...

Public Safety
Author Santa Clara Police DepartmentPosted on June 25, 2022
Throughout California, law enforcement has seen automobile thefts and break-ins increase at an alarming rate. Who provides the burglar with the opportunity? The victim...
SPONSORED