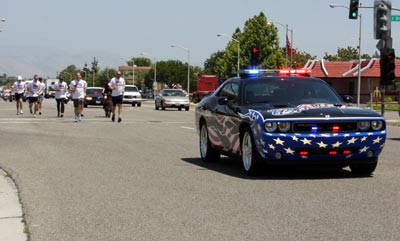 The Law Enforcement Torch Run started in Tulare County on June 10. Over two weeks, the Flame of Hope will have traveled hundreds of miles throughout 21 counties arriving in Davis on Friday, June 24 for the opening of the 2011 Special Olympics Northern California Summer Games.

As one of the state’s largest grassroots fundraising efforts, the Law Enforcement Torch Run has become the single largest supporter of Special Olympics Northern California, a free year-round sports program that serves over 14,000 children and adults with intellectual disabilities. Since 1995, Northern California law enforcement has raised $10.3 million with the goal to raise another $1 million in 2011.

Special Olympics provides year-round sports training and competition in a variety of Olympic-type sports for children and adults with intellectual disabilities. Programs give athletes continuing opportunities to develop physical fitness, demonstrate courage, experience joy and participate in the sharing of gifts, skill, and friendship with their families, other athletes and the community.

The concept for Special Olympics was born in the early 1960s when Eunice Kennedy Shriver started a day camp for people with developmental disabilities at her home in Rockville, Maryland. The first International Special Olympics Games were held in 1968 at Soldier Field, Chicago with 1,000 athletes from 26 states and Canada.

Santa Clara Police Department’s fundraising goal of $1,000 has been met, but the SCPD would like to keep on raising money for Special Olympics. Visit their fundraising site at http://torchrun.kintera.org/santaclarapd to make a donation.