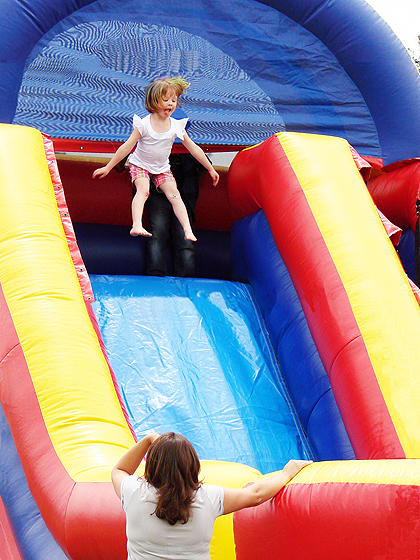 “Other organizations do a family fun day. Traditionally PAL does a dinner and dance for parents, but we wanted to do something for the family so Shuree [Teixeria] came to the board with the idea,” said PAL Executive Director, Officer Bill Davis.

“My son plays for West Side Little League and they do something similar,” said Teixeria. “I thought it would be great to do something with [PAL] to bring the community together.”

“We wanted to do something different,” added PAL-GAL Softball Commissioner Lee Erickson. “We did an opening day and now this. We wanted to include the whole community.”

Music pumped through speakers set up behind home plate. There was food and plenty of events like face painting and bean bag toss booths, as well as a bounce house and air slide to keep attendees occupied all day. The dunk tank was a big hit, with many of the PAL-GAL softball players hitting the target multiple times. Hula hoops were laid around the field and throughout the day both youths and adults would pick them up and try them out. The D.A.R.E. car was parked in front of the prize table as a reminder that fun can be had without using drugs and other illegal substances.

There were plenty of prizes for the raffle and silent auction including a “Pamper Your Special Lady” package with a one hour massage, Fiorillo’s Restaurant gift certificate, a bottle of 2005 cabernet, two wine glasses and a silver bracelet; a “PAL Basket” with a PAL t-shirt and sweatshirt, fees for next year, and gift certificates to All Out Baseball and A Slice of New York; and the monster “Family Fun Basket” with four tickets to an Oakland Athletics game, four passes to AMC, gift certificates to Tony and Alba’s, Mio Vicino, and Baskin Robbins, a Betty Crocker four ingredient cookbook, Pictionary, Yahtzee, Letter Line Up, popcorn, candy, cookies, and chips and salsa.

Proceeds from the event will go to equipment, umpire fees and scholarships. “We don’t turn kids away,” said Davis. “If there is a kid who wants to be involved and can’t afford it, we have scholarships available.”

The event was a success. Teixeria received positive feedback throughout the day and took suggestions on how PAL can improve the event next year.

Information on PAL, PAL-GAL Softball and other PAL activities can be found at www.santaclarapal.org.

Public Safety
Author Erika TownePosted on January 31, 2023
The Santa Clara Police Department (SCPD) is on scene of an investigation in the area of Harrison Street between Lincoln and Jefferson Streets. According...
SPONSORED