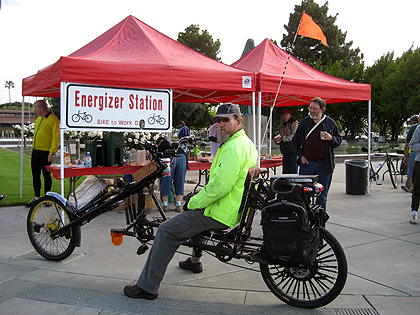 Spunky senior Santa Claran Barbara Shaw was one of about sixty bicyclists to stop off for morning refreshments at Santa Clara’s Bicycle Advisory Committee (BAC) energizer station at El Camino Real and Lincoln Street on the 17th Annual Bike to Work Day May 12.

“I love biking,” says Shaw, who bikes around town almost every day. “It’s fun and exercise. I do errands.” Shaw’s husband, Howard, bikes every morning to buy the newspaper.

Shaw recounted the sad tale of her 92-year-old hairdresser, Emma Kaliterna, owner of Emma’s Coiffures on Franklin Street. Kaliterna later confirmed that her unlocked bicycle with an Easter basket in it was stolen at the end of April—a cautionary tale to secure your bike carefully no matter where it is parked or how short a time you will be away from it.

Rick Gillick pulled up at the energizer station on a leftover Schwinn from the 70s. There were a couple recumbent bikes and a tandem bike. But perhaps the most unusual one was the hybrid-electric bicycle Cat Woodmansee had fabricated out of hardware store items and welded together.

“It’s like a Prius without the gas,” Woodmansee says of his creation before continuing on his 13-mile-ride from San Jose to work in Santa Clara.

According to BAC activity coordinator Marshall Johnson, the number of bicyclists for 2011 is down from about 140 last year.