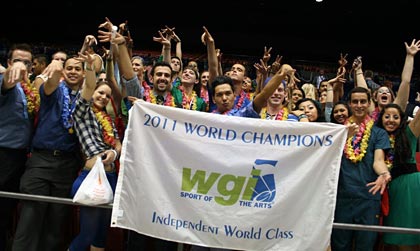 “And in first place, from Santa Clara, California …” was an oft-heard phrase in the last two weeks at the University of Dayton Arena in Dayton, OH, where the Santa Clara Vanguard pulled off the unprecedented feat of winning two separate world championships with their winter guard taking the gold medal on Saturday, April 9, and seven days later the Vanguard’s winter percussion took the championship on Saturday, April 16.

The Vanguard’s indoor winter guard won their second Winter Guard International world championship gold medal in the past three years with a final score of 97.20, out of 100 points.

The Vanguard winter guard performed a program titled ‘All Good People’ to popular music from the 70s progressive rock group YES. According to winter guard manager and Santa Clara resident Kelly Carter, the unit wowed the 10,000 spectators in Dayton over three days of competition. The guard began performing Thursday evening, April 7 in the world class quarterfinal preliminaries at the Wright State University Nutter Center, and scored a 94.9, which – by the end of the evening – had them in first place by one point. On Friday, the guard increased its lead to 1.1 by scoring a 96.65.

Last year the winter guard and their program ‘Letting Go’ finished in the silver medal position. In 2009 the guard won their first world championship with their program ‘The Kiss.’ The Vanguard winter guard program performs their routines with a combination of colorful spinning flags, rifles and sabers, combined with choreographed dance routines and risky tosses and equipment combinations. The guard was reactivated by the organization in 2006, after a two-decade hiatus as an effort to enhance the summer drum corps’ color guard program of the Vanguard Drum & Bugle Corps.

The Vanguard’s newest program, their indoor winter percussion ensemble, arrived at the indoor percussion world championship in Dayton, OH on Wednesday, April 11, a mere four days after the guard’s inspiring victory. The winter percussion performed a musical program entitled The Wave, inspired by the painting ‘The Great Wave off Kanagawa.’ Their music featured original segments interwoven with the impressionist orchestral masterpiece “La Mer” by Claude Debussy.

The Vanguard percussion ensemble of 37 Bay Area high school and college students rode ‘The Wave’ into Dayton and won the WGI Open Class Percussion Championship on Saturday afternoon with a score of 93.875. The silver medalist group STRYKE of Florida scored a 93.008. This is the Vanguard Winter Percussion’s first trip to the world championship and is only their second year of existence.

Winter percussion ensembles are often either high school or college-affiliated groups, or independent groups – like Vanguard – who recruit membership from their own region when high schools or colleges do not provide for such ensembles. The Vanguard winter percussion ensemble consisted of 37 Bay Area high school and college students. Similar to indoor winter color guard, winter percussion groups perform in gymnasiums and arenas throughout the season and create their music on a combination of battery percussion instruments and orchestral percussion instruments, while enhancing the presentation by performing simultaneous drills and movement in a defined space during the course of their six to eight minute programs.

Founded in 1967, the Santa Clara Vanguard is a non-profit performing arts organization, serving high school and college students primarily from Silicon Valley, with a world-renowned Vanguard Drum & Bugle Corps of 150 members, the Vanguard Cadets Drum & Bugle Corps of 110 members and Winter Color Guard and Winter Percussion programs of 35 to 40 members each that serve a range of students from adolescents to young adults.   Located in the heart of Silicon Valley, the Vanguard tours the United States in national competition during the summer, and has won six Drum Corps International (DCI) world championship titles.