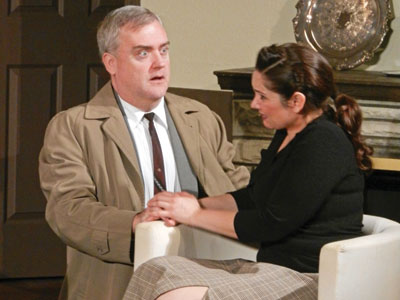 Since 1962, the Santa Clara Players have been entertaining audiences with high-quality stage performances at wallet-friendly prices. Now in its 50th year, the Players have decided to take a trip down memory lane and reprise many of the plays the group originally performed. The 2011-2012 season began with SCP’s first ever production, My Three Angels and is continuing with the Frederick Knott penned murder mystery, Dial “M” for Murder.

The play, which opened at the Triton Museum Hall Pavilion February 24, is set in London and centers around Tony Wendice (Joey Axiaq) and his wife, Margot (Kateri Rose). After marrying his wife for money, Wendice comes up with what he believes is the perfect murder. Wendice blackmails an old acquaintance from Cambridge University, Captain Lesgate a.k.a. C.A. Swann (Brent Beebe), into committing the crime and creates an alibi for himself by going out with Margot’s former lover and crime-fiction writer, Max Halliday (Steve Lewis). Unfortunately, the murder doesn’t quite go according to plan and Wendice finds himself in the midst of an inquest. And, just as Wendice starts thinking he has moved past his wife’s attempted murder, he receives a visit from Halliday. Halliday has used his years of crime writing to come up with a plan to save the day, only Wendice isn’t interested in taking any blame for the attempted murder. He’s gotten off, his wife, though still alive, has been taken care of, and he’s ready to take the money and run. Only he didn’t realize he committed one fatal flaw. Inspector Hubbard (Matt Matthews) knows where Wendice failed, but needs proof. And as the play wraps up, the audience learns if Wendice gets away with his murder-for-hire plan or if he gets caught and sent to jail.

Most of the actors are veterans of the Santa Clara Players’ stage. Rose last performed with the Players in Squabbles, Lewis and Beebe in My Three Angels, and Matthews in Run for your Wife. Axiaq, however, is making his debut in Dial “M” for Murder.

Rose plays Margot with innocence. She is in denial when Halliday and Hubbard present Wendice’s plan to her. And, Lewis is the perfect Halliday. Lewis gives the part a perfect mix of intelligence and obliviousness as he explains his Margot-saving scheme to Wendice. Beebe does a fine job as the swindler Swann, only his prior actions force him into accepting Wendice’s offer and lead to his demise. Finally, Axiaq excels in his first Players’ performance. His facial expressions; from conniving to concerned absolutely sell his role as the villain of this story.

Dial “M” for Murder continues through March 17 at the Triton Museum Hall Pavilion at Warburton and Don Avenues in Santa Clara. Shows are Friday and Saturday nights at 8 p.m. and Sundays at 2:30 p.m. Tickets are $16 ($13 for seniors and $10 for students under 22) and available for purchase through www.scplayers.org or by calling (408) 248-7993.

Arts & Entertainment
Author AdminPosted on July 16, 2014
Kicking off the show with an original tune, “Smiles of My Friends,” the Gary Gates Band played the first installment of the Sunday afternoon...

Arts & Entertainment
Author Larry SacksPosted on October 1, 2019
The Santa Clara Parade of Champions has been a time-honored legacy in the City of Santa Clara since 1945 until it was suspended in...

Arts & Entertainment
Author Melissa McKenziePosted on April 9, 2014
There are plenty of interesting historical finds throughout the City of Santa Clara – from the houses featured on the annual home tour to...
SPONSORED

Business
Author Cynthia ChengPosted on August 27, 2020
Since September 2019, twin sisters Mindy and Megan Park have been busy with MCourse, the online bakery that they own. Although the business does...