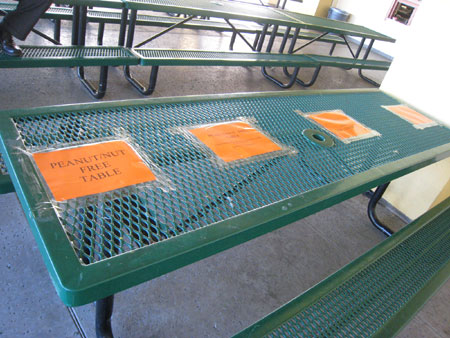 Two years ago, when Mandi Dickey’s daughter was in daycare, she came into contact with some peanut butter another child was eating.

“My daughter didn’t eat it but she got a little bit of it on her hand and rubbed it in her eye,” Dickey says. “Then she went into anaphylactic shock. Fortunately, the daycare provider was able to administer the EpiPen.”

According to Dickey, her daughter is deathly allergic to peanuts and all other nuts. Unfortunately, nuts and traces of nuts are found in many foods.

“If you were to get sugar cookie dough, it might have macadamia nut flour in it,” Dickey says. “If you get plain M & Ms, there are traces of peanuts in them and my daughter has had a reaction to those too.”

Fortunately, Dickey is sending her daughter to kindergarten at Sutter Elementary School with a peace of mind. At lunchtime, her daughter eats at a special peanut and nut-free table with other children who share similar allergies.

“I think the table at Sutter School is wonderful because I don’t have to worry about my daughter eating something next to someone who might cause harm for her,” Dickey says and adds that the table will give her daughter a sense of belonging in a group.

According to Tom Funcheon, principal of Sutter Elementary School, promoting safety among his students is one of his top priorities.

“We have a couple of students who have their own placemats at the lunch table for the extra precaution just in case the table made contact with peanut or nut products during the weekend or in the evening,” Funcheon says.

“We have some students with severe peanut allergies in kindergarten this year,” Funcheon continues. “So the kindergarten teachers have already told the parents to avoid putting nut or peanut products in their kids’ lunches and snacks, if possible. We’re not saying that you can’t have peanuts or nuts, but to consider other options.”

“We have had a lot of students with nut allergies, especially in the last two years in the lower grades,” says Hans Barber, principal of Don Callejon School. “I talked to principals from other schools, such as [Tom Funcheon from] Sutter Elementary School, and they said they have a nut-free lunch table. At least three or four other schools have a nut-free table.”

So Barber worked together with some parents and started a special lunch table for children with peanut and nut allergies.

“I think it’s important for us to take into consideration the health needs of any students,” Barber says. “If there are a certain group of students who needs something, and it can be easily provided, then why not provide it?”

According to Barber, the table is heavily used by the elementary school students because sometimes the kids with food allergies want their friends to sit with them. Students with peanut and nut allergies have priority at the table.

“Some of the parents have expressed their gratitude for this table,” Barber says.

A Healthy Lifestyle Comes to Peterson