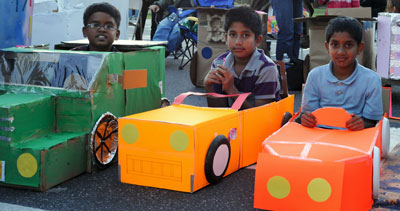 Fold out chairs and colorful homemade box cars were parked in front of a projector screen on the playground of Millikin Basics+ Elementary School on the evening of Friday, Oct. 7. Parents and children of the school were seated and bundled up in warm jackets with cups of cocoa, bags of popcorn, and plates of pizza purchased from the school cafeteria. They were ready for the featured movie, “How to Train Your Dragon.” But first, they eagerly waited for the announcement of the winning box cars.

The criteria for the judging, conducted by three faculty members, are a box car’s creativity, realistic nature, and funniness. The eight winners and teams who received goodie bags had either created their box cars by themselves or with parent help.

“There are not really any rules for the contest,” says Nicole Syth, a kindergarten teacher who is one of the judges. “[You want the kids] to have fun and use their imagination.”

Julia Hagan, a fifth-grader, won one of the prizes for the most realistic box car made with parent help. Her black Model A Coup came with real wheels and a comfortable seat.

“[Over the summer], Julia’s grandpa, my dad, was up for a visit from South Dakota,” says Karla Hagan, Julia’s mother. “My father has a Model A Coup that he has been trying to restore. So when he visited, Julia had the idea she wanted a Model A too.”

“Grandpa and I put together the wood and we did the wheels together,” Julia shares. “We also covered the seat with foam, cardboard, and fabric. I helped Grandpa with the screwdrivers too.’

Nolan Mangini, Srujan Chaganti, Joshua Joseph, and Prabhav Vashist, all first-graders, were part of an individual team who won another one of the prizes for the most realistic box car made with parent help. The boys made a fire truck. Wearing bright red fire hats, the boys were eager to discuss which parts of the truck they painted.

“They had a lot of fun doing this,” says Supriya, the mother of one of the boys. “This project taught them about teamwork, creativity, and learning to share, like sharing their brushes.”

“We host many activities at this school [celebrating] creativity and this is just one of them,” says Melba Rhodes-Stanford, principal of Millikin Basics+ Elementary School. “It’s so fun to see the designs the students have.”

Westwood Principal Tapes One for the Team

Briarwood Teacher Honored With Award and $1,000 in School Supplies