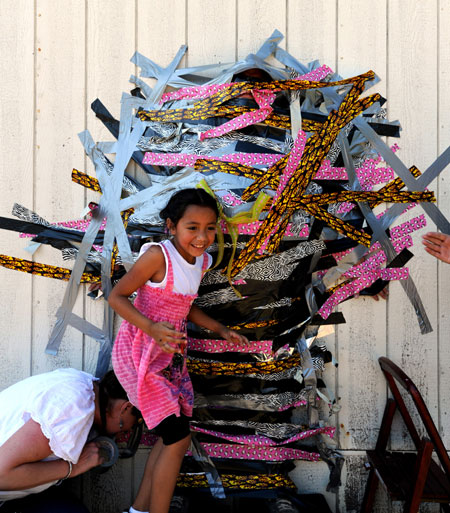 Students at Westwood Elementary celebrated a great achievement on Friday, September 30. The achievement was breaking the Santa Clara Unified School District (SCUSD) record for the Scholastic One for Books fundraiser with the students raising $1,940.41. Heidi Murray’s second-grade class, took top honors by raising $291.11 – the most of any class in the school, took part in the celebration event.

The money was raised for the Scholastic One for Books program. According to the district, for every dollar raised, the class receives Scholastic dollars to purchase books for the classroom. Scholastic then matches the monetary donations schools generate, with a donation of up to one million books to three national non-profit organizations dedicated to helping kids and families in need: Kids in Distressed Situations, Inc., the Kids In Need Foundation, and the Marine Toys for Tots Foundation.

Before the Bucket Drive began, ideas to motivate the students were discussed. Principal Andrew Lucia decided to allow the class that raised the most money to duct tape him to the outside wall of a building. Duct tape has probably been used for almost everything from making wallets, boats and clothing and not surprisingly, even to tape people to walls but this event was a first for the SCUSD.

In front of the assembled student body of approximately 500 students, Lucia took center stage standing on several milk crates. The taping began when 7-year old Fernanda placed the first piece of duct tape onto Lucia and ended when she placed a bow on him, 23 minutes later. 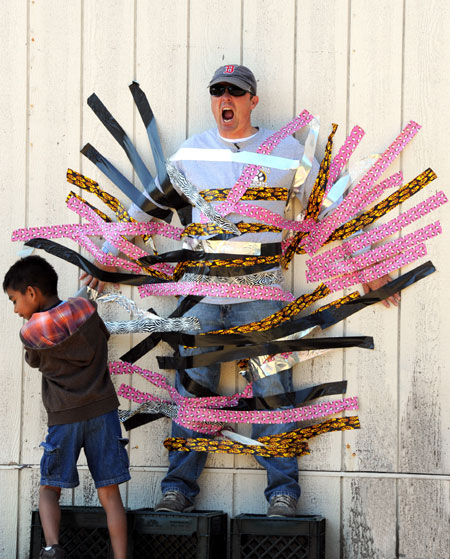 Though the color and pattern varied, the Hello Kitty duct tape seemed to be most unusual. The idea of duct taping their principal to the wall seemed to appeal to the students because within five minutes of the start, the students cheered and jeered in unison, Tape that mouth! Tape that mouth! After what must have seemed like an eternity, they were finally rewarded when a staff member placed a piece of silver duct tape over Lucia’s mouth. According to Lucia, Duct tape is gummy and doesn’t taste good.

With a piece of duct tape over his mouth, the shouts turned to Tape his eyes! Tape his eyes. Fortunately, Lucia was wearing sunglasses, because those were soon taped as well. By the time the bow had been placed on him, it was difficult to tell what had been taped to the wall, as it resembled a duct tape cocoon.

Mr. Lucia thanked the entire Westwood community for helping this be a successful fundraiser. Giving students the opportunity to get great books for them to read is a top priority for us especially during these times. Public school libraries throughout California are drastically affected by the state’s financial crisis. SCUSD elementary school libraries this year are open only two to three days are week. If you wish to make a monetary donation to the Westwood School library, contact Andrew Lucia at 408-423-4301 or by email at alucia@scusd.net.

A Healthy Lifestyle Comes to Peterson