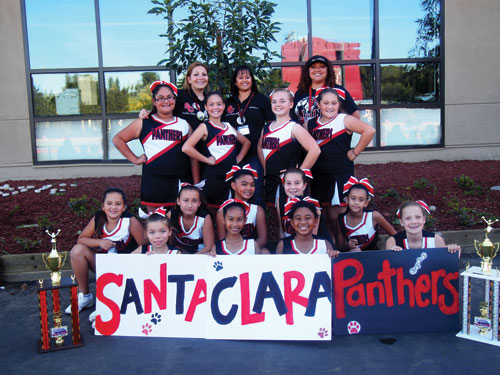 A day that started with elation and the potential to reach nationals, turned into tears as the Santa Clara Panthers Cheerleaders placed third at the Pacific Northwest Regionals Spirit Championships on November 23 at the Santa Clara Convention Center.

“Getting to here this season, they’ve gone through so much,” said second year head coach Wendi Jacobs. “They started out with five coaches and 15 girls and they came to regionals with one coach, two business managers and 13 girls, so they lost two girls since the last competition and they’ve been pushing really hard.”

Performing to a music mix of Nicki Manaj, Jennifer Lopez, and Ludacris, the Panthers, made up of nine to 12-year-old girls, performed well and felt good about their chances prior to receiving the judge’s scores.

“I feel like they did wonderful,” said Jacobs. “They showed their Panther pride and they had an amazing time.”

The judges, however, found flaws in the routine and didn’t place the Panthers in the top two spots, which would have allowed them to participate in the national competition this weekend in Florida. And, despite mostly positive remarks, the evaluation team placed Santa Clara behind the Salinas Cardinals and Gilroy Browns.

“We did the best we could do,” said Jacobs to the girls after the third place finish. “While we were standing there, we were next to Salinas, who can’t even believe they placed above us at the last two competitions. They said we should have taken first…[The score sheet says] ‘great choreography, great smiles, great use of visuals and roll offs, but everything needs to be sharper – watch timing and sharpness. Keep chests up and look out on jumps…loved the energy’…I don’t know how this happened.”

The Cardinals dropped a barrel roll during their routine, but the judges still awarded them with a first place finish.

“I feel like we should have gotten first,” said 12-year-old Lauren Kuja through tears. “But we will just stay strong and keep going.”

“I’m feeling proud that we tried our best,” added 12-year-old Abigail Almendarez. “I’m just proud that my team showed what we could do.”

Six-year-old Aridella Wright, a member of the T-Cats cheer squad, was also sad about the loss, while 11-year-old Anndrea Wright remained hopeful that the Panthers would grow from the experience. “I feel like we all did our best and we tried but maybe we could have fixed a couple of things like the timing,” said Wright, adding that she felt the team would make it to nationals next year.

In addition to the Panthers, the Mitey Cats cheer squad performed an exhibition routine at the competition. The Lions did not participate at regionals as they had been knocked out in the previous round.