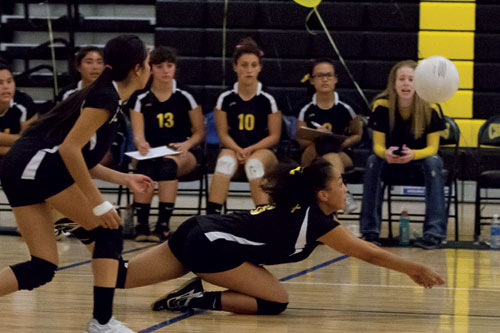 On a night filled with emotion, Chargers’ seniors, Rochelle Ruiz (’12), Lisa Nguyen (’12), Alyssa Chagoya (’12) and Melica Sapon (’12), wrote heart-felt messages prior to the game, thanking their parents, coaches and teammates as they were honored before a boisterous crowd on their senior night—their last game wearing black and yellow at home. After the quick ceremony, the girls eagerly took to the floor against their cross-town rival, the Santa Clara Bruins. “Anytime we play Santa Clara, the energy raises ten-fold. Add in senior night and the stands full of Wilcox supporters, the girls were really excited,” said Head Coach Ululani Pomroy.

In the first set, Kimberly Van Dyne (’14) was able to get Wilcox on the board first with a ferocious kill—one of many throughout the match. Santa Clara was able to gain momentum and knot the score at 10 with an emphatic spike by Gen Ramirez (’12); however, as the Bruins celebrated the point, Wilcox dug the ball and scored on the unassuming Bruins. “It was just a matter of who was going to make the mental mistake first,” Coach Pomroy said of the Bruins’ lapse in concentration. It was a shift in momentum the Bruins would not overcome as the Chargers fed off the crowd’s roars, and won the set 25-13.

With the first set behind them, Santa Clara was desperate to come out with a bang in the second set. They did just that, as they took a 6-0 lead to silence the crowd early on. Hailey Mock (’14) limited the damage with an ace and beautifully placed kill, cutting the lead in half. Add in a few huge blocks by Van Dyne along with perfectly placed tips, Wilcox tied up the score at 11 before Ruiz got the go ahead ace. The Bruins would keep it close towards the end, but Alina Kwiatkowski (’15) was able to find the hardwood on consecutive kills to end the set 25-22, leaving Wilcox one win away from the match victory.

Both offenses came out firing in the third set as the score flip flopped often. As the score tightened up and Wilcox was just two points away from victory, the Chargers took a time out. As the girls exited the huddle, they echoed through the gym, “One team, one family.”

“I truly believe that in any team sport you become a family, especially after spending so much time together.  You fight together to achieve something. You need others to help you achieve whatever goal you have established for your team,” Coach Pomroy said. As the team came together, they were able to achieve their goal, and with one final kill won in straight sets over the Santa Clara Bruins.

“I was so proud of the way they played,” Coach Pomroy said. “That was the best match all season.  Everyone came together to pull that win off especially in three sets.  To see them play as a team was awesome.”

Chargers Overshoot Their Chance Against Eagles