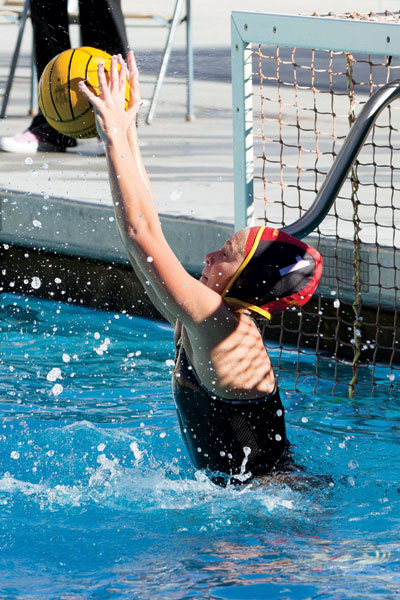 In their second year since transitioning from the El Camino Girls Water Polo Division to the higher De Anza Division, the Wilcox Chargers have had a difficult time. In her second year as head coach, April Lujan discussed the evolution of her team after the switch, and the mental preparation needed to compete. “Coming into the season we [lost] seven players so I knew we had a lot to work on. However, this being our second year in the De Anza league, I felt that we had more experience under our belts, which would allow for a higher level of play. These girls work very hard and have stepped up in terms of becoming mentally stronger as well as physically because they understand that being in the De Anza Division does not allow for many mistakes or a stalled lack of effort as that can lead the other team scoring a goal.” Wilcox had the tall task October 16 of defeating the second place finishers in CCS from a year ago, the Los Altos Eagles. Their mental game had to be on point.

In the first quarter, the Chargers speed kept them up on the counterattack, but misplaced shots and passes left points off the board. Coach Lujan said the mistakes stemmed from “not reacting as quickly as we need to against these highly aggressive teams.” When forced to set up their offense, the Chargers were unable to get the ball to hole set, Madison Martin (’13), forcing Wilcox to shoot from the perimeter. Again, they left points off the board as most of their shots sailed over the cage. “We have had problems with our scoring opportunities, which showed in this game,” Coach Lujan said of their poor shooting performance. “We have days where we are consistent and then others where we miss a lot over the cage.” Carli Lazzarini (’13) managed to put Wilcox on the board while they were stout defensively, surrendering just two goals to Los Altos thanks to outstanding field blocking by Lisa Green (’14), their hole set. Going into the second quarter, Wilcox was down just 2-1.

Unfortunately, Wilcox’s play turned dismal in the second quarter as they carelessly threw the ball away and continued to launch shots past the cage. Wilcox found themselves down 6-1 after the first half.

During the second half, Wilcox made the necessary adjustments, as they began to drive and post up at the cage. The shooting woes prolonged, though – they began to shoot it right at Eagles’ goalie, Romy Aboudarham’s (’15). With two more goals on the board for Los Altos, Coach Seth Tasman put in his bench with 2:54 remaining. Wilcox was able to capitalize on Los Altos’ back-ups with goals from Hayley Rebholtz (’13) and Green, but it was not enough to overcome the point deficit. The Eagles prevailed 13-4.

Bruins Come Up Short Against Height Of Pioneers

Sports
Author Andrew BenschPosted on December 28, 2016
While it may not have been the ultimate fairytale ending down in Disney World for the Santa Clara Lions, Head Coach Craig Connelly and...

Sports
Author Andrew BenschPosted on December 13, 2018December 12, 2018
For the first time in school history, the Wilcox Chargers are Champions in the Northern California region. After an absolutely thrilling 34-30 victory over...

Sports
Author Andrew BenschPosted on July 11, 2019
Despite an inauspicious start to their second-straight do-or-die game, the Briarwood All Stars gave their fans one last thriller this past Friday. The Santa...
SPONSORED