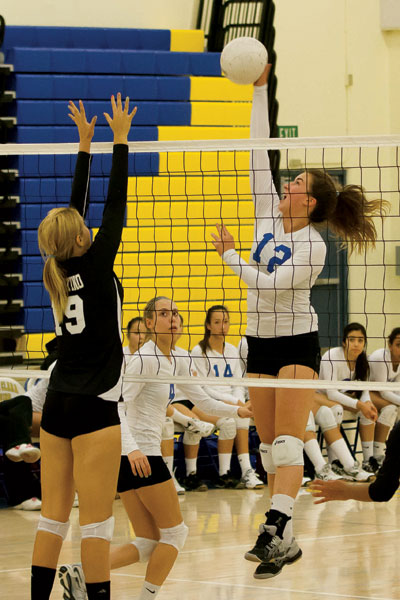 As soon as Santa Clara and Cupertino stepped onto the court, it was easy to see that the Bruins girls’ volleyball team was at a major height disadvantage. Coach Kieu, however, prepared his team just like he would for any other game and would not make the difference in stature an excuse. “I am not concerned with what each team we play presents. I am more concerned with the team [we] show up with. If [we] hustle, and play hard without any regrets, then we have no problem with any team, no matter if they are taller than us.” Height would prove to be difficult to overcome as the Bruins would not go down quietly to the Pioneers.

The towering combination of Cupertino’s Masha Yelsukova (’14) and Katie Martin (’14) frustrated the Bruins’ front line in the first two sets. With their arms outstretched over the net, ready to block the Bruins’ kill attempts, Santa Clara was forced to pass the ball to them, sending it into the back court of the Pioneers where Natalie Nigeut (’14), was usually waiting for an easy return. Santa Clara was seldom able to dig out of the back row, but when they did, miscommunication and passing errors ensued. It wasn’t all bad for the Bruins, however, as Stephanie Rudd (’14) set up Sam Rudd (’14) at the side of the net, allowing her to spike it between the mountainous front row of Pioneers.

Down 0-2 in the match, the Bruins would not abandon their determination to beat the favored Pioneers. With a “chick, chick, BOOM”, Kayla Katzman (’14) got the Bruins on the board first with a nice kill. Santa Clara would continue to outplay Cupertino with timely, well placed kills and some great digs by Sam Rudd and Kellee Cuelar (’14). Cupertino rallied back to take an 11-9 lead, though Santa Clara was able to avoid the straight set loss, winning 25-22.

With the score tied 8-8 in the fourth set, the Bruins began to fall apart with multiple communicational miscues and two ill-advised net touching violations, putting Santa Clara down 19-10 late in the contest. Coach Kieu explained the collapse as a mental one. “All sports are 75 percent mental and 25 percent physical. We let the mental side of our game get the better of us.” The Bruins would not rest though. They rallied behind one of their top servers, Helen Alemu (’15), and captain, Gen Ramirez (’13), who were able to bring them within four (24-20). That was all the Bruins could muster, however, as the next serve flew into the net, giving the Pioneers a 3-1 victory.

“[We must] continue to practice with our mental part of the game,” Coach Kieu said of bouncing back from the loss. “That is what is really beating us.” Santa Clara Bruins Volleyball plays at Fremont on October 18 at 5:30 p.m.

Chargers Overshoot Their Chance Against Eagles

Sports
Author Andrew BenschPosted on September 27, 2022
After opening the season with three straight comfortable victories, 35-13, 38-14 and 42-14, the Wilcox Chargers finally found themselves in a tight, competitive football...

Sports
Author Andrew BenschPosted on September 19, 2022
The varsity volleyball match between the Wilcox Chargers and Fremont Firebirds Friday night featured two teams in opposite situations. Seven of the 14 girls...

Sports
Author Andrew BenschPosted on September 14, 2022
Tuesday’s volleyball box score might make it look as if the Homestead Mustangs cruised to a straight-sets victory over the Santa Clara Bruins. Homestead...
SPONSORED