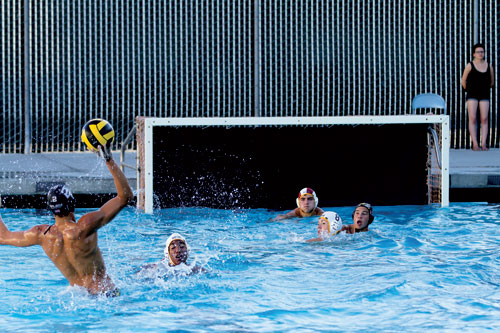 It has been three years since Wilcox last lost a match to cross-town rival, Santa Clara. Last Tuesday was no different, as The Chargers counterattacked their way to victory. Wilcox led from the get-go, but Santa Clara did not go down without a fight, and were able to exploit some of the Chargers’ flaws.

Wilcox was simply the faster team in the first quarter, as three of their five goals came off counterattacks, while the other two came from good ball-side drives from Eddie Simonin (’13), that left the Bruins in his wake. “I usually look at the personnel I have coming into each season to figure out what our strengths and weaknesses are and how to approach the upcoming year,” Chargers Head Coach Rich Cruzen said of his team’s preparation for the game, “This season we’ve worked hard on our counter attack and it has been a focus all year.” Wilcox was able to close out the half by playing stifling defense, forcing Santa Clara to turn the ball over numerous times, and allowing just one goal before entering the second quarter.

Wilcox’s offense began to struggle as the Bruins prevented the Chargers’ counterattack from scoring. Instead, they played suffocating defense, forcing Wilcox to settle for outside shots. They did manage one counter attack goal by Lukas Voith (’13), his second of the contest. The Chargers took a slight hit on the defensive side of the ball, as they allowed the Bruins to cut the lead in half as they went into the third quarter up 6-3.

Despite the fact that Santa Clara was without their top scorer Connor James (’13), Wilcox was able to once again shut down the Bruins set offense in the second half, allowing just three goals, all by Bryce Woodell (’13). The scoring continued for the Chargers, as Alejandro Barrionuevo (’14) was able to tally four of his five goals in the third and fourth quarters. It was apparent that Wilcox focused more on their counterattack than their half court offense in practice this season, as it continued to struggle to find its identity. However, Coach Cruzen doesn’t believe James‘ absence from the Bruins’ roster will weigh heavily on the outcome of their next meeting, saying they prepared for this game assuming James would be there. “We made the assumption that he would be well enough to play and prepared for Santa Clara at full strength. Conner James is a great player. However, Santa Clara has a strong senior team and are always a threat with or without James.”

Wilcox was able to finish on the same high note as the team started, shutting down the Bruins’ attempt at a comeback by scoring two late goals, both by Barrionuevo, to seal the deal and win by a final score of 11-6. The two rivals meet again at Santa Clara High School for the Bruins’ senior night on October 25th.

Watch for Wilcox to continue their winning ways at home against Cupertino, October 11.

Bruins Come Up Short Against Height Of Pioneers

Sports
Author Andrew BenschPosted on October 4, 2022
Friday night’s matchup with the Cupertino Pioneers may have been week one of the league season for the Santa Clara Bruins, but it was...

Sports
Author Andrew BenschPosted on September 27, 2022
After opening the season with three straight comfortable victories, 35-13, 38-14 and 42-14, the Wilcox Chargers finally found themselves in a tight, competitive football...
SPONSORED