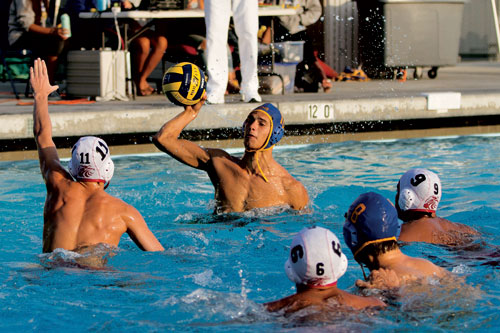 With 10 returning seniors, the belief among the Santa Clara Bruins boy’s water polo team and its coaching staff has been, if the Bruins were to ever win the El Camino division, this would be the year. Led by captains and first-team all-league recipients, Connor James and Bryce Woodell, the Bruins have a roster that is full of talented, year-round players; so it’s easy to see where their confidence stems from. The season, however, has not lived up to the hype. The Bruins have gone 1-3 in league play with two losses coming at home. Needless to say, the Bruins were eager to defend their home pool against Fremont High School last Tuesday, in hopes of righting the wrong and getting the team back on track.

The team struggled from the get-go, though, as Fremont came prepared, daring the Bruins to beat them with outside shots as they doubled-teamed James most of the game. With the offense unable to get James the ball, it was up to the supporting cast to put some points on the board in first half. But nobody stepped up. Defensively, the Bruins were just as vulnerable. They were ejected five times throughout the half, and communication was dismal at best, with the Bruins getting outhustled at every opportunity. The team did manage to get two goals from Woodell and Ian Crutchlow early in the second quarter, but the Bruins simply had no fluidity on offense and could not come up with an answer for Alex Kashi of Fremont, who had four goals, multiple assists, and drew most of their ejections. At the end of the first half, the Bruins trailed 9-2. After a dismal third quarter, Coach Puccinelli opted to pull his Fremont starters out of the game and send in the bench against the defeated Bruins that ware down by 10 goals. Santa Clara was able to capitalize on the young, inexperienced Firebirds, with four goals from James, one from Sanford York, and multiple drawn ejections. It was not enough, however. As the clock hit double zeros, the Bruins hung their heads, unable to look at the scoreboard that read Home: 7 Away: 14. Santa Clara, once again, was unable to obtain the seemingly elusive first home victory, dropping their record to 1-4 in league play with only cross-town rival, Wilcox, remaining on the schedule before going through their league round-robin one last time.

After the Bruins’ third consecutive home loss, Coach Stefan Fursh spoke of the contributions to their home woes and how they might go about fixing those problems. “We have the speed, talent, and experience to compete at a high level in this league. It’s our execution that has held us back; the confidence to create hustle plays out of nothing. We have to clear our heads and prepare ourselves mentally for the second half of the season.”

Look for the Bruins to get back in the win column, October 4 against Lynbrook, in their quest to become league champions.

Sports
Author Andrew BenschPosted on October 4, 2022
Friday night’s matchup with the Cupertino Pioneers may have been week one of the league season for the Santa Clara Bruins, but it was...

Sports
Author Andrew BenschPosted on September 27, 2022
After opening the season with three straight comfortable victories, 35-13, 38-14 and 42-14, the Wilcox Chargers finally found themselves in a tight, competitive football...
SPONSORED