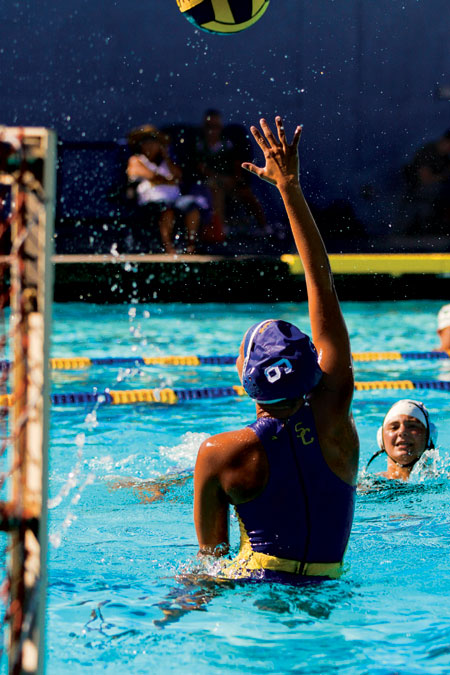 As the defending champions of the El Camino Division got set to take on Harker this past Tuesday in a rematch of last year’s water polo league semi-finals, there was a noticeable feeling of confidence flowing amongst the lady Bruins. They had just beaten this year’s Harker team 10-7 at a tournament the previous weekend en route to a third place finish.

With a strong showing so far this season, expectations are high for the girls who made it to CCS for the first time in the team’s history, even without their former league MVP, Jessi Boyd, who graduated last year. The core group of girls has remained intact with strong 2-Meter Defender Shelbie Higginson, and fellow seniors Emily White, Catherine Thorne, and Danielle Strauss. Their confidence, however, may have been over-brewed as Harker came into the game with a chip on their shoulder and revenge for the past two meetings on their mind.

When asked about the preparation for their game, Head Coach of the Bruins, Aja Bumbaca mentioned their previous meeting with Harker. “We prepared by practicing a certain defense that works on Harker. Since we had played them three games prior to Tuesday’s game, we knew what to expect.” That strategy was to stop MVP candidate Keri Clifford.

During the first half, Santa Clara was able to keep Clifford in check, holding her to just one goal. The Bruins kept the score tied at three going into halftime, with goals from Higginson and Strauss despite the poor shooting and lack of offensive output. “Unfortunately executing our offense was our problem in the game,” Coach Bumbaca said of the struggling offense. “We have implemented a new offense this year that we are not accustomed to, and it takes practice.” The Bruins struggled to find the open player the whole game, forcing long-range shots that would sail over the cage. In the second half, Santa Clara’s defense broke down as they allowed Clifford to draw multiple ejections, leaving the Bruins in far too many penalty killing situations. Limiting the damage, the Bruins were able to head into the final quarter down just 7-5 after Strauss scored a goal from half tank as time expired in the third. Santa Clara was able to tie the game early in the fourth. But with under two minutes left in the game, Clifford drew yet another ejection before Harker finally capitalized and re-took the lead. The Bruins had one last desperation heave that sailed over the cage before the final buzzer sounded.

Even with the early season 8-7 loss, Coach Bumbaca is still confident they can reach their goal of making it back to CCS, “We have many talented players, but as always, when you graduate seniors you must adapt to a new team with a new chemistry. Communication and teamwork will get us back to CCS.”

The Bruins next play an away game at Wilcox High School on October 2.