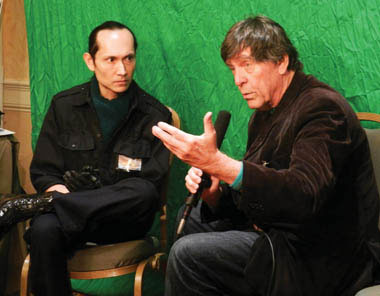 Thousands of miles away, at a Marriott Hotel in Virginia, hundreds of people, many of who are considered to be the world’s most influential people in politics, industry and finance, met June 2-3 for the annual Bilderberg Conference.

Much closer, hundreds of conspiracy theories convened the same weekend in Santa Clara for the 12th annual Conspiracy Convention. Ironically, Conspiracy Con was also held at a Marriott.

The Bilderbergers are considered to be a secret society (albeit a well-publicized one), and by conspiracy standards that makes their conference a place where the most privileged people get together to decide which strings they intend to pull. As conspiracy theory goes, there is a reason for everything and often that reason is contradictory to the official story America is told by the mainstream media.

According to a 2006 New York Times/CBS News poll, the majority of Americans don’t believe the official story of what happened on September 11, 2001. Since more and more people continue to buy into the idea that the official story is a lie, most Americans believe in a conspiracy.

Conspiracy Convention explores all facets of conspiracy – from the far-fetched to the plausible. Each speaker is given 90 minutes to present what he or she believes to be concrete evidence proving his or her particular point.

Someone like Jim Fetzer (the convention’s opening speaker) continued the tradition of discussing theories related to 9/11. Fetzer showed his evidence on why he believes each of the four crash sites was created through Hollywood magic done with smoke screens and special effects (additionally Fetzer believes the second plane to hit the Twin Towers was a hologram).

In what may have been an attempt by promoter Brian William Hall to incite excitement for this September’s UFO Con, there were three speakers who used their time to discuss abnormal flight or alien activity.

Kerry Cassidy discussed her belief that all humans are actually of extra-terrestrial ancestry, while Jay Weidner showed his proof that the moon landing was faked by film director Stanley Kubrick. In addition, last year’s self-proclaimed expert on the Illuminati, Doc Marquis, talked about Nazi UFOs currently in our atmosphere.

Not speaking this year were two of last year’s most controversial presenters – Douglas Dietrich who claims to be an expert on occult machinations at the Presidio Military Base in San Francisco and Anthony J. Hilder who has been a favorite fact finder for many conspiracy theorists. Both men, however, were special guests at this year’s convention and available for interviews and discussions in the exhibition hall.

The two-day event culminated with the annual speaker debate where convention attendees were able to gain further insight into the theories offered at the convention.

As the times change, and more and more people continue to find their news from alternative sources, the interest in these types of conferences will continue to grow. There’s nothing inherently crazy about this or any of the similar conspiracy conventions out there. People, in general, like making connections between major events and their own lives, and nearly every story proven to be false started with one person, or a group of people, connecting the dots. The reality is that nearly everyone is somewhat of a conspiracy theorist.

Community
Author Cynthia ChengPosted on April 4, 2012
On April 1, sunshine yellow and royal blue balloons decorated the tables at the Santa Clara Senior Center. People lining up at the two...

Community
Author Santa Clara WeeklyPosted on May 15, 2019May 21, 2019
The following is a list of events happening in Santa Clara and throughout the Silicon Valley. Want to share an event to be featured?...

Community
Author Larry SacksPosted on February 1, 2012
For those who have never seen the Santa Clara Vanguard (SCV) perform, saying it is a drum and bugle corps, or labeling it as...
SPONSORED