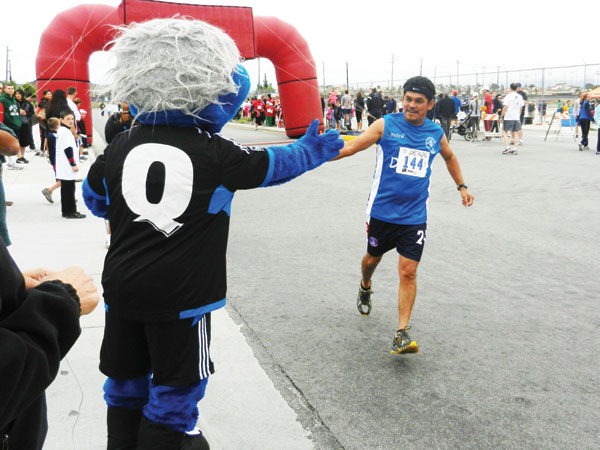 Approximately 850 racers convened at the site of the San Jose Earthquakes new stadium on Coleman Avenue in San Jose on May 27 for the inaugural 5K/10K Earthquakes Challenge and Kid’s Fun Run.

Just before 8 a.m. the 10K racers took their mark at the start of the course. When the gun sounded, Q, the Earthquakes’ mascot, led the runners down Newhall Drive before stopping to give racers high-fives as they made their way toward Coleman Avenue. Fifteen minutes later, the gun went off again, and the pack of 5K runners and walkers began their race. The course, which went through the streets of San Jose and Santa Clara, ended in front of the Earthquakes training facility.

“We had a ton of race day sign ups,” said Alison High, Earthquakes Community Relations Coordinator. “We are really excited about the response.”

Salinas, who crossed the finish line with a smile on his face and hardly breaking a sweat said, his wife was one of the reasons he chose to participate. “My wife is training for the Nike Women’s Marathon. We ran together, but she pulled away at the end and finished five yards ahead of me.”

“We wanted to start a tradition of getting this together at the spot of where we will eventually have some great soccer,” said the Earthquakes front office. “It was also another way for us to raise money for the community. We are definitely planning on making this an annual event, and hope it will become large enough to where we will see thousands of racers in the future.”

After the race, awards were given for the top finishers and racers had the opportunity to meet Salinas and Earthquakes player Evan Newton. The pair signed autographs, talked to fans and took photographs. Salinas was also very open about his recovery from clavicle surgery and his desire to return to the field. “[The trainers] have given me the OK to start practice next week,” said Salinas.

All registered racers were given a race t-shirt, ticket to a future Earthquakes home game during the 2011-2012 season, and admission into the post-race celebration, which included snacks, beverages, music and family-fun activities.

“This came together quickly, but the turnout was great,” said the Earthquakes front office. “Things worked out great. Next year we will ideally do it after a home game with the hope that some of the players will run.”

KAISER PERMANENTE FIGHTS CANCER ONE STEP AT A TIME