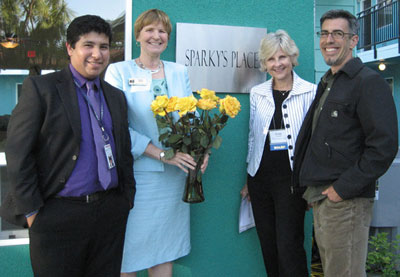 Peacock Commons in Santa Clara is a very uncommon housing complex for homeless, transition-age youth. It was developed by Bill Wilson Center, and 50 percent of its $8,747,000 cost was funded by Santa Clara Redevelopment Agency money.

Peacock Commons is unique in a number of ways, beginning with those who live there. The renovated, two-story, 28-unit apartment complex is home to 18- to 25-year-olds who have fallen into homelessness.

Peacock Commons provides supportive housing where residents – who include youth with children, youth with a mental health diagnosis, and victims of domestic violence – can live as long as they need to. The complex currently houses forty-seven adults, including staff, and sixteen children.

The resident project manager, service coordinator, and counselors offer optional case management, employment and personal counseling, and independent living skills. They also serve as role models and provide 10 to 15 hours monthly of support services, such as organizing a potluck or teaching a class in the community building in the center of the complex.

“It’s a community; it’s not just an apartment building,” emphasizes Harlan in a video that can be viewed at www.billwilsoncenter.org. “One thing that the kids asked for is they said they wanted hangout places.”

A business center has internet-connected computers and printers. A children’s play area includes a playhouse with a pretend solar panel assembled by Qualcomm employees through Habitat for Humanity’s Project Playhouse. A rooftop solar system heats water for the entire complex and powers the common areas.

Residents pay rent on a sliding scale, ranging from $253/month for a studio subsidized by Santa Clara County Mental Health to $1,126 for a three-bedroom unit. It is expected that residents will work their way up and out of Peacock Commons through education and training.

“These teens had no parents to fall back on, no one, but now they have us,” says Harlan.

Peacock Commons, shaded by a 200-year-old oak tree, was purchased in 2007. Renovation of the older apartment complex began in February 2011. The first residents moved into the renovated complex in April of this year.

Bill Wilson Center, 3490 The Alameda Santa Clara, was founded in 1973 by the late Bill Wilson, a former Santa Clara mayor.

On May 23, Bill Wilson Center received the Santa Clara County Mental Health Board’s first Community Service Award for the provider that has made an extraordinary difference in the lives of people facing mental illness.

Community
Author AdminPosted on May 1, 2013
Jump Sky High for Special Olympics, an all day fundraising event, was held on April 15 at all three Bay Area Sky High Sports...
Community
Author AdminPosted on November 7, 2012
From now through the end of the year, Silicon Valley Animal Control Authority is running a licensing special for residents of Campbell, Monte Sereno,...
SPONSORED