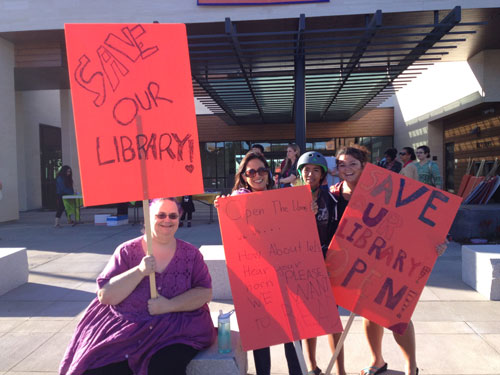 The supporters of the Northside Library have endured a storm of uncertainty ever since this summer, when the county issued a temporary restraining order requiring construction on the nearly complete library to stop. While the city refutes the claim that it misused redevelopment agency funds to build the library, Northside Library’s doors remain locked. On October 8, library supporters glimpsed a rainbow of hope when a majority of Santa Clara County’s Board of Supervisors voted affirmatively on a resolution supporting future state legislation to exempt the Northside Library project from being entangled in the redevelopment agency dissolution process. With the approval of the state, construction on the library can be completed with the use of RDA funds the city had allocated for this project years ago.

At the meeting, a handful of community members expressed their support for continuing progress on the Northside Library. Tracy Wingrove, associate executive director of the Santa Clara City Library Foundation and Friends, declared libraries as “literacy hubs” and pointed out that the Northside area is currently not being served by a library. Not everyone supported the resolution. Terri Ryland, interim assistant superintendent of business services for the Santa Clara Unified School District, expressed concern that the school district, seeking RDA assets, might lose access to financial support.

“I think we heard a very compelling case for the use of these [RDA] funds,” Santa Clara County Supervisor Ken Yeager said after hearing community members speak. “With the dissolution of redevelopment in the City of Santa Clara and throughout the state, certainly, school districts will get their share and additional dollars. It just seems unfair that for all the work and effort that went into the building of the library, that [the library] would be held hostage through all this.”

“The county is one of the plaintiffs in the lawsuit that halted the building of the Northside Library when it issued the temporary restraining order,” says Maria Daane, executive director of the Santa Clara City Library Foundation and Friends. “So for the county supervisors to come forward with this proposal to help the library is really an incredible thing.”

Daane points out that the passing of the resolution does not mean that the doors to the Northside Library will open overnight.

Orry Korb, the county counsel, shared at the meeting that the county and the city are involved in communication about the Northside Library and several other RDA projects. Addressing this revelation, Daane feels that if the county and the city can quickly resolve their issues with the approval of the state’s Department of Finance, the community could see the library open much sooner than if library supporters wait for the state legislature to act.

“Once we get the green light to continue finish building the library, it’d take another five months for shelving, furnishing, setting up computers and wiring, and doing inventory on the books to take place,” Daane says.

Through the Legal Looking Glass of Northside Library Controversy

City Politics
Author Erika TownePosted on May 17, 2022
A plan to help Santa Clara deal with the implementation of SB 9, the new state law that allows single-family homeowners to divide their...

City Politics
Author David AlexanderPosted on May 11, 2022May 16, 2022
Santa Clara’s City Council approved a new housing development on Pomeroy Avenue despite a lack of support for the plan. Plus, council members went...
SPONSORED