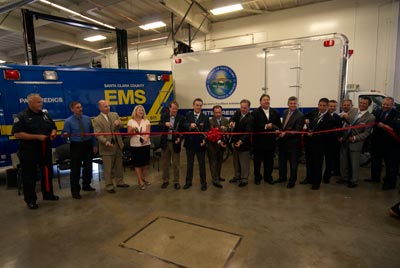 When Santa Clara’s red and white ambulances give way to blue and Rural/Metro Corp’s (www.ruralmetro.com) blue and gold on July 1, one thing won’t change: the county’s expert team of 268 emergency medical technicians (EMTs).

In December of last year, the Santa Clara County Board of Supervisors chose Rural/Metro to replace AMR as the county’s ambulance provider. As part of the five-year contract, Rural/Metro agreed to retain AMR’s paramedics. After more than six months of hard work to make the change seamless, Rural/Metro held an open house on June 24 at its San Jose headquarters.

In addition to the obligatory self-congratulation from local politicians, the event let the community preview Rural/Metro’s fleet of 55 brand-new ambulances and press the flesh with many of the company’s EMTs. The five-year county contract represents 70,000 emergency transports and $45 million in revenue annually.

The for-profit emergency medical services (EMS) company was founded in 1948, and has its headquarters in Scottsdale, AZ. With over $500 million in revenue, Rural/Metro provides ambulance and non-emergency medical transportation services in 400 communities across the U.S., including specialties such as neonatal and bariatric care.

Recently, San Diego renewed its contract with the company, despite an ongoing audit of the financial operations of San Diego Medical Services Enterprise (SDMSE) – a previous joint venture between the city and Rural/Metro. As part of the new agreement, Rural/Metro bought out San Diego’s interest in the joint venture.

With the combination of an aging population and healthcare reform moving millions into the ranks of the fully insured, industry experts say the next decade offers EMS providers significant opportunities.

To ensure continuity of service for county residents, the Rural/Metro rehired virtually all of AMR’s paramedics – ensuring knowledgeable and experienced staff from day one.

Local EMTs say that the transition has gone smoothly. “Everyone did everything they could to make an easy transition for employees,” reports one veteran paramedic. Plus, “the new equipment is like Christmas every day.”

Community Public Safety
Author Carolyn SchukPosted on July 1, 2022
Suppose tomorrow morning you woke up on another planet where people looked like you, but their thought processes and behavior were completely foreign to...

Public Safety
Author Santa Clara Police DepartmentPosted on June 25, 2022
Throughout California, law enforcement has seen automobile thefts and break-ins increase at an alarming rate. Who provides the burglar with the opportunity? The victim...
SPONSORED