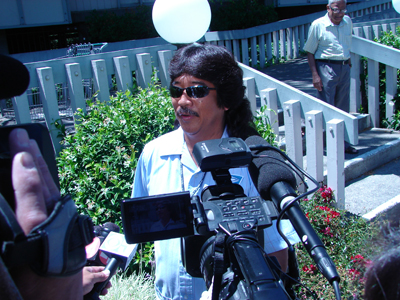 On Wednesday, July 20, Letter Carrier Danny Paeste was on his appointed rounds, delivering mail to a townhome at 1343 Sarita Way, Santa Clara, when he noticed a distressed baby sitter and two children standing outside of the house.

The babysitter told Paeste there was a fire in the kitchen that was getting out of control. When Paeste noticed black smoke coming out of the house, he took immediate action by first calling 911, then instinctively grabbed a garden hose and entered the house. He dragged the hose into the house towards the flames that were starting to reach the ceiling over the stove. However, he soon realized the hose was too short.

As the fire started to gain in intensity, Paeste had the presence of mind to get another hose, attached them, and began to put out the fire. According to Paeste, the smoke was so hot and thick that he had to crawl toward the stove, fighting the fire from a crouched position, and to keep from breathing in the hot smoke.

Paeste stayed with the frightened babysitter until the Santa Clara Fire Department arrived at the scene. The babysitter, the children and the neighbors, including an elderly woman, and other children, evacuated the adjacent homes without injury.

Seeing everything was under control by the local fire department, Paeste continued on his appointed rounds, completing his deliveries as scheduled.

“Every day, somewhere in the country, a postal employee comes to the aid of a customer, and in many cases life-threatening situations,” said Santa Clara Postmaster Rick Keppeler. “Letter carriers are the eyes and ears of the neighborhoods they serve, and Paeste is just another example of the informal neighborhood watch we provide while delivering the mail.”