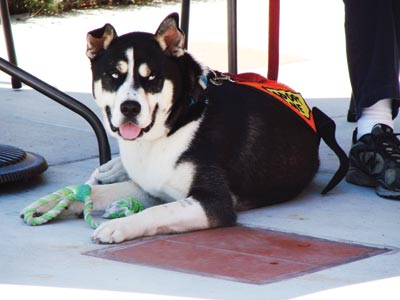 With over 200 cats and kittens in its care, Humane Society Silicon Valley is busting at the seams with felines, and, with the increase of dogs being rapidly discarded by those who don’t understand the requirements and time constraints necessary to own a canine, HSSV needed to get the word out that there are plenty of animals at its Animal Community Center desperately waiting new homes.

Because of the need to help bring people and pets together and because HSSV understands the human-animal connection, the organization planned and executed the first annual Wags and Purrs event on July 16.

Potential adopters were able to take advantage of Pawfurred Pricing. Pawfurred Pricing allowed families and individuals to name their own price for dogs and cats over six month, up to and above the standard $175 adoption fee. HSSV also knows kittens thrive when they live in pairs so the My Buddy and Me promotion was in effect. My Buddy and Me allowed adopters to take home two kittens under six months in age for a single adoption fee.

While browsing the cat and kitten halls, adopters were made painfully aware of just how many cats HSSV currently has in its care. Every apartment was full and additional condos were set up to showcase additional animals. Many felines are even currently being housed in HSSV staff offices as animals continue to overflow the center.

Within the first few hours, only a handful of animals had been adopted, but by the end of the day, over 35 pets were adopted between HSSV, HSSV’s PETCO satellite locations in Sunnyvale and Saratoga and the rescue groups in attendance. At HSSV, 16 animals including two cats, four dogs, three puppies and seven kittens went home. Silicon Valley Animal Control Authority brought one dog to the event, and he was able to find a new family. The Perfect Dog Rescue adopted one dog and sent another to a home for a foster-to-adopt situation. CARE adopted two dogs, two puppies and had two dogs placed on hold and NorCal Animal Rescue Group ended up with five adoptions and three people who are arranging to spend more time with dogs they met at the event.

But, the numbers can be deceiving. There are still plenty of cats and dogs in HSSV’s care that need loving homes. Cats like Juno, a seven-year-old tortoiseshell colored female who enjoys being petted and sitting on her owner’s lap and dogs like Mangus, a two-year-old Husky mix. Mangus is perfect for an active family who would love a dog to take hiking and jogging. Both of them are still available at the Animal Community Center.

Next, HSSV will hold Barktoberfest in October for pit bulls like Rocket, a year-old black and white Pit Bull mix who needs an active household and someone willing to help him continue his obedience training, and other large dogs.

If Juno, Mangus or Rocket sound like a match, the Pawfurred Pricing and My Buddy and Me specials will continue through the end of July so don’t hesitate to adopt a new best friend. If you can’t gicve a home to one of these or any of HSSV’s other animals, consider making a tax-deductible donation or volunteering time to help HSSV continue to provide basic and medical care to the animals at both the Animal Community Center and PETCO satellite adoption centers.

HSSV is at 901 Ames Avenue in Milpitas. Additional information on any of HSSV’s adoptable animals can be found at www.hssv.org.

Concert in the Park Series

Community
Author Melinda MyersPosted on September 20, 2019
Short or tall, big or small, ornamental alliums are a treat for flower gardeners and for butterflies, bees and other pollinators. Plant the bulbs...

Community
Author Santa Clara WeeklyPosted on April 18, 2019
The following is a list of events happening in Santa Clara and throughout the Silicon Valley. Want to share an event to be featured?...
SPONSORED