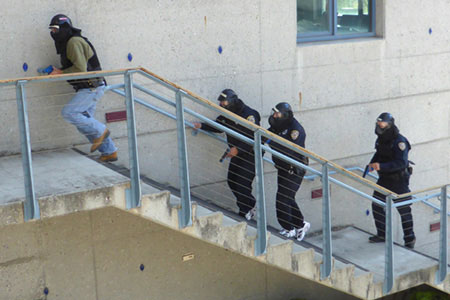 Over five days this August, the Santa Clara and West Valley-Mission Community College District police departments joined forces to practice response to a shooter at the college and train for emergency situations. Santa Clara Police shared their technical expertise and resources while the College District provided three buildings and major campus walkways on the Mission College campus. Training was given to 156 officers.

The officers worked in teams consisting of combined SCPD and WVMD officers to assess, locate and address various situations that may occur on the campus. Ken Tanaka, chief of police for the WVMD PD said, “This was a great opportunity for both departments to work together and train for a real emergency that may occur at the college.  The Santa Clara officers became familiar with the campus and the Mission officers had the opportunity to train with their counterparts who would be responding to the campus to assist in the event of a major incident.  We have to be ready to work as a team and prepared to respond to any emergency situation on the campus.”

Public Safety
Author Santa Clara Police DepartmentPosted on March 31, 2020
A Los Gatos resident responded to an online ad for the sale of a gaming system. On Jan. 15, the resident made arrangements to...

Public Safety
Author Carolyn SchukPosted on August 12, 2020
In June, Santa Clara reorganized its police department command staff, adding an additional assistant police chief to the budget and leaving one of the...

Public Safety
Author Alissa SorotenPosted on December 4, 2020December 9, 2020
This afternoon, Santa Clara County, along with the rest of the Bay Area, announced that they will implement the State’s Regional Stay-at-Home Order on Sunday,...
SPONSORED