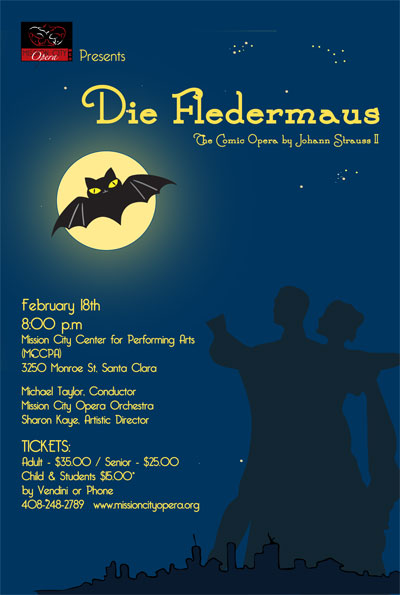 The semi-staged performance at the Santa Clara Center for the Performing Arts is directed and conducted by popular MCO Music Director Michael Taylor.

The laughter piles up at a rich eccentric’s New Year’s Eve party where “Dr. Bat” turns the trick on the practical joker who earned him that name by tipping him into a flirtation with a lady who turns out to be his wife in disguise. Meanwhile, the wife’s maid, disguised as the wife, finds in the party’s host – a turn of the century Andy Warhol – a sugar daddy for her stage career. Oh, and there’s lot of funny accents, lawyer jokes, and champagne.

Strauss’ sparkling score demands nothing less than a true master to fully levitate its bubbling contents. And it finds one in conductor and director Taylor, who always leads the peerless MCO orchestra with both passion and precision, and brings MCO’s singers to a high polish.

“Fledermaus is fun, first and foremost” Director Taylor explains. “It’s extremely easy to like and even non-opera-goers will recognize many of the songs.”

“In his own time Strauss’ music captivated most of Europe and America,” he continues. “Contemporary composers all admired Strauss, even when they disagreed about everything else.”

Founded in 1996 by Sharon Kaye, for ten years MCO has raised the curtain in Santa Clara on professional productions at about half the budget of other regional opera companies. At the same time, MCO’s orchestra is the largest south of San Francisco, attracting the talents of the area’s finest musicians. The company regularly contributes its time to Santa Clara events and is unique in its outreach program to those with developmental disabilities.

There will be only one performance of Mission City Opera’s Die Fledermaus: Saturday, Feb. 18 at 8:00 p.m. at the Mission City Center for Performing Arts, 3250 Monroe Street in Santa Clara (Wilcox high school). The show is about 3 hours. Tickets are $15-$35 and can be purchased at the door, online at www.missioncityopera.org, or by calling (408) 248 2789.

Arts & Entertainment
Author Erika TownePosted on November 20, 2018
The works of some of the Bay Area’s most skilled artists are now on display at Santa Clara’s Triton Museum. The annual Salon Exhibition...