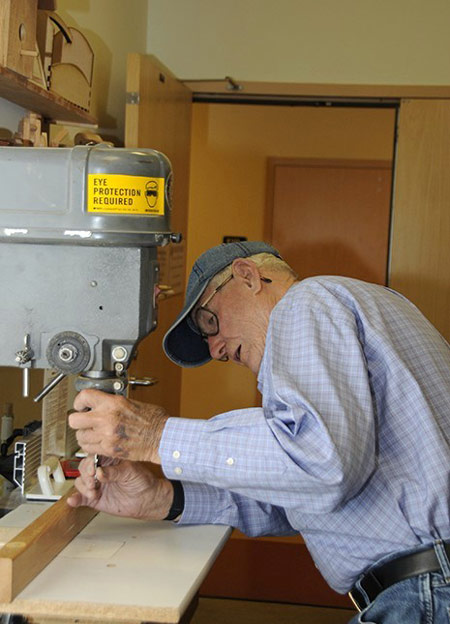 Like a magician pulling a rabbit out of a hat, master woodcraftsman Don Sutton can make a rabbit out of nothing but a scrap of wood. Or a hippo or a giraffe or a pelican or an elephant.

But for the holidays, Sutton and other volunteers at the Santa Clara Senior Center woodshop have made 500 toy cars from scrap wood. The cars will be added to other items in 500 Santa bags for low-income children in Salinas and distributed by Santa’s Helpers of Sunnyvale.

“The toys look deceptively simple. But the process is complex, and the finish work is done well. They’re all handcrafted and so smooth,” says Tom Freitas, woodshop monitor.

Charley Zeroun and Ty Rockhold assist Sutton with the car-making project. Sutton lays out the car patterns. Zeroun cuts and sands the pieces and drills wheel holes. Rockhold paints the wheels and the bodies at home because painting is not permitted at the woodshop. Then he adds the movable wheels to each body.

Sutton has been the master woodcraftsman behind this project for 21 years. He and his late wife, Edna, began Santa’s Helpers with friends Sally and Jim Flick at Trinity United Methodist Church in Sunnyvale in 1991, the year after he retired with 30 years of service from Lockheed Martin.

“I’ve just got to hand it to this guy for all his devotion. He’s done a lot of service for the children,” says Zeroun, who has worked alongside Sutton for a couple years.

Sutton first worked out of the garage of the Santa Clara home where he lived for 42 years. When he moved to a mobile home in Sunnyvale, there was no room for a workshop, so he started coming to the Senior Center.

“Don and I started together at the woodshop. I wouldn’t be here if it weren’t for Don. His work is inspiring. He teaches people what to do. He’s good at details. Detailed drawing is a talent,” says Freitas. “Don is a good guy, a gentle soul. He’s very involved in the community.”

“I grew up with woodworkers, and I just enjoy doing it,” says Sutton, whose German grandfather, father, and brother were also woodworkers. “I have as much fun showing people how to make things as making them.”

Sutton has 25 notebooks filled with 1,000 wood patterns. He has designed and made toys—initially for his grandchildren—such as a garbage truck that raises and dumps, vintage cars, doll houses, animal banks and puzzles, a clock puzzle, a fish bowl with fish jumping, and an apple with a bookworm.

After serving in the Marines, Sutton graduated in 1952 from the University of Missouri with a B.S. Degree in Business Administration. The day after graduation, he came to California to work for Douglas Aircraft in Long Beach. In 1960 he went to work for Lockheed.

Health issues slowed Sutton down this year, but now he’s back at the woodshop and, with other volunteers, made toys for the Senior Center Holiday Craft Faire held November 17. If you missed the craft faire, stop by the woodshop at the Senior Center, 1303 Fremont Street, any Tuesday or Thursday morning between 8 a.m. and noon. Money from the toy sales pays for woodshop supplies.

“It’s not about the money. It’s about the pleasure of doing it,” says Freitas, speaking for all the volunteers.