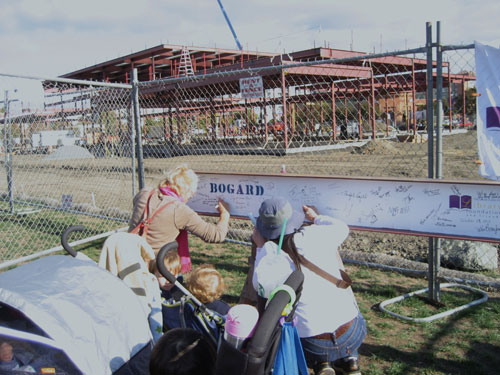 The October 25 beam signing marked the end of the structural steel phase of library construction that began with groundbreaking July 9 of this year in the Rivermark shopping area, north of Highway 101 and just off Montague Expressway. The next construction phase is framing the walls of the library, which is scheduled to open in late 2013.

The custom of painting the last beam white and signing it evolved from ancient Viking traditions in Scandinavia, where chieftains built huge wooden homes and secured an evergreen tree to the topping out beam.

The first people to sign the beam at 2:45 p.m. were two grandparents with their grandson. By the last hour, from 5:30 p.m. to 6:30 p.m., it was hard to find a spot to add another signature on the fifteen-foot-long beam.

“We were astounded at the turnout for the beam signing. It amazed us that on only 48 hours notice via email, so many Northside residents would be willing to turn out to place their signature on the beam.  I think it is a testament to how excited the residents of Northside are about their new library,” says Daane.

“It’s a great addition to the community,” says Rivermark resident Kirthi Vani, a Library Foundation & Friends board member who is on the Northside Fundraising Committee. “I hardly go to the library now because it’s a 15 to 20-minute drive, but I can see myself coming here every day.”

“The library is an amazing community effort. It’s been in the works for more than 40 years,” says City Librarian Julie Passalacqua.

Library service to the north side was first promised during a successful Agnew Village annexation vote election campaign in 1960 to entice village residents to vote in favor of becoming part of the city of Santa Clara.

“You can expect handy bookmobile service and eventually construction of a branch library in your community,” states a campaign brochure.

However, with varying political will and finances, funds to build the Northside Branch Library at 695 Moreland Way were not secured until 2012 when funds were transferred from the Redevelopment Agency account to the Foundation & Friends of the Santa Clara Library.

Bogard Construction based in Santa Cruz was awarded the $9.85 million construction contract and oversees 57 subcontractors and 500 to 600 workers. The cost is divided fairly evenly, half for materials and half for labor.

Construction Superintendent Diego Rocamora says that the 17,355-square-foot library will be the first LEED (Leadership in Energy and Environmental Design) silver-certified building that Santa Clara has built. By comparison, Santa Clara’s Mission Library is 8,000 square feet, and the two-story Central Park Library has about 80,000 square feet of floor space.

“We’re a part of history today. I’m a Rivermark resident, and we’ve waited for this for so long. It’s like a dream come true. And it feels incredible to be part of the history,” says Ann Eldhose, manager of KeyPoint Credit Union’s Rivermark Branch.