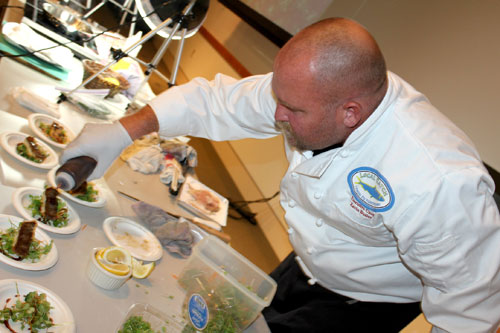 On the afternoon of March 2nd, the Central Park Library’s Redwood Room exuded the fresh smell of a fish market after a big catch. By the end of the afternoon, the aroma of pan-fried fish with vegetables filled the space. A staff member from the Monterey Bay Aquarium gave information about sustainable seafood and representatives of Local Catch Monterey Bay offered live demonstrations on oyster shucking, filleting fish, and cooking the fish.

“I tried my first oyster today, and I loved it,” says Angela Ocana, Santa Clara City Library’s Sustainable U coordinator. “Thanks [to Local Catch Monterey Bay] for introducing us to awesome tasting fish that doesn’t taste fishy.”

Alan Lovewell, co-founder of Local Catch Monterey Bay, works with local fishermen and supports local fisheries to make sure the highest-quality fish goes to the community.

“We also do events and today, we showed people how to shuck oysters,” Lovewell says. “To shuck oysters, make sure you have a proper oyster shucking knife. Make sure you’re starting with a good oyster. A good oyster is fresh and cold, not hollow, and hasn’t been out in the sun. The colder the oyster, the easier it is to open.”

Kevin Butler, an executive chef working with Lovewell, showed the hungry audience how to make fish filet from petrale sole and cook it.

Butler dredged pieces of the fish filet in a mixture of flour, corn starch, salt, and pepper. The pan, filled with oil, sizzled when Butler dropped down the pieces of fish, skin side down. The fish cooked for three minutes before being flipped over and cooked a little bit longer.

While the fish cooked, Butler prepared a salad with shredded kale and arugula, orange zest, pea shoots, and julienned carrots. Orange juice, hoisin sauce, white wine, and sriracha sauce were mixed into a dressing. The sweet and tangy dressing was tossed into the salad and used to garnish the fish, with its golden and crispy skin and soft and flavorful flesh.

“I was always fishing as a child, and my mom had a hard time trying to satisfy everyone’s appetite,” Butler says. “She did an experiment and told us, ‘You don’t like what I’m cooking? You cook.’ My first recipe was the ‘crawdad surprise,’ a stew made from crawdads and what was in the refrigerator. When I was young, I liked to make fun of French things. But now, I’m a French chef.”

Community
Author Melissa McKenziePosted on October 24, 2012
In Santa Clara County, only 25 percent of Latino and Hispanic students have completed the courses required for entrance into the California State University...