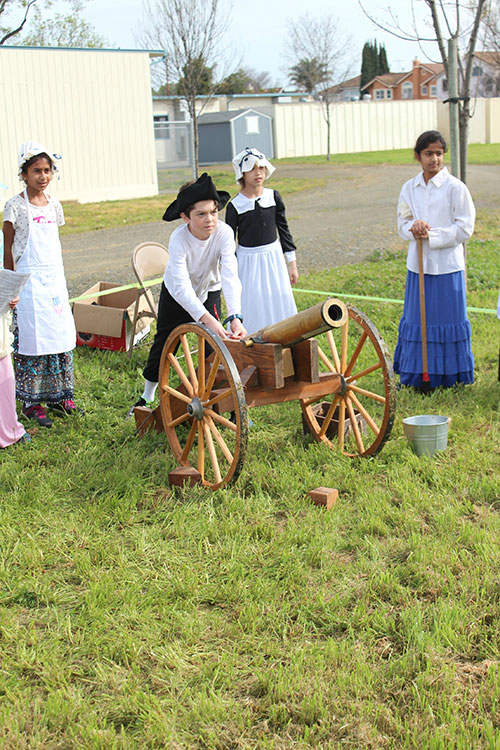 First thing in the morning on March 10 at Laurelwood Elementary School, the fifth-grade students designed colonial style hats to wear. The girls made mob caps that looked like bonnets with ribbon bands woven through them and the boys made tricorn hats with three corners. Whether it was writing in calligraphy using quill pens dipped in ink or whittling figures out of bars of soap, the students wore their handmade hats throughout Colonial Day, a tradition that has lasted for well over 20 years at the school.

“Right now, we’re studying the American Revolution and we’ve studied the establishment of the colonies,” said Amber Wacht, fifth-grade teacher at Laurelwood School. “We want to give students a hands-on experience with history and specifically it’s American history’s colonial America and the birth of the nation. This event is run by parent volunteers and they coordinate everything, including the stations, getting the materials, and getting donations. We couldn’t do it without them.”

The fifth-graders rotated through eight different stations throughout the day.

“One of the more unique stations is the cannon; cannons were used during the American Revolution,” Wacht said. “The kids simulate going through the process of loading and firing a cannon and cleaning it afterwards to reload. A parent built the cannon using an air compressor. The kids have to use all the tools and go through the process of cleaning the cannon and putting in fake gun powder.”

In one of the classroom stations, students made johnny cakes and butter from scratch. To make the johnny cakes, students mixed together cornmeal, water, salt and butter and spooned the batter onto a griddle. A drizzle of syrup or honey gave each cake a sweet finish. A churn allowed the children to make butter though only one student could work on it at a time. To make individual portions of butter without a churn, small hands repeatedly shook salt and cream in lidded sauce containers.

“Tussie Mussie is what we call potpourri today,” said Wacht, describing another station. “Here the kids take different herbs and flowers. Colonists didn’t take baths very often then so the potpourri is supposed to go into a person’s clothing chest (or armoire) of their good fine clothing to help the clothes smell better.”

In the cafeteria, students learned a traditional colonial dance called the Peascod dance while moving in circles to the charming tune of “Gathering Peascods.” The students partnered up with one another to learn the steps. According to Wacht, the Peascod was an English country dance the colonists performed.

At the leather working station was Minde Christensen, one of the many parent volunteers on site. She and another volunteer guided students to hammer imprints of letters and designs onto straps of cowhide leather, used during colonial times. With these straps, students fashioned bracelets and backpack tags.

“I think Colonial Day is a great opportunity for the kids to come and participate in activities during a different part of history,” Christensen said.

A Champion for Migrant Students and Families Marches On

Every Student an Artist at Sutter Elementary School