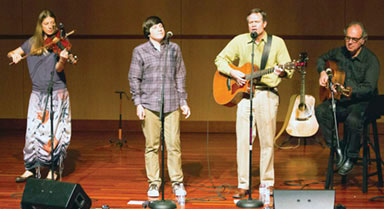 Playing at SCU’s most intimate venue, the three musicians brought the beauty of traditional Irish music to a small, but appreciative crowd.

Alden, who is most known for having music inspired by, and based on, the poetry of W.B. Yeats, opened the show with San Francisco-based Tergis. The duo played much of Alden’s music along with a few Irish and Scottish reels. Additionally, concert-goers were in for a treat as Bostonian fiddle player George Keith joined the pair for a few songs.

“One of the wonderful things about playing folk music like this is that wherever we go in the world we have a shared repertoire of doing this – like a special language that only Irish musicians know,” said Tergis. “And, we have never played at all together before tonight – the fiddles – but we have this wonderful tradition of tunes so it’s never too late to start. Although you may want to have a basement if you’re going to start playing the fiddle, otherwise you may end up getting a divorce.”

Keeping with the spirit of the upcoming holiday, Young Ireland, made up of Patrick O’Hara and his 14-year-old son, Michael, played many of their original folk songs during the second half of the show.

“The name of the band is Young Ireland – it’s my son and I,” said O’Hara during the show. “Young Ireland is actually named after the Young Ireland movement in the 1850s…and of course there were negotiations for peace and as it was from time to time the Irish rebelled…the organization was political and it was heavily influenced in the media and the nation. Thomas Davis and a lot of the Young Irelanders were influencers and writers for that newspaper and so they included attorneys and journalists as well as the working class. Of course they were put down, cast out of Ireland and many made it to America. So we wrote the song Young Ireland in their honor.”

All of Young Ireland’s music tells the story of Ireland’s long, turbulent history and is inspired by Irish folk tradition. Each of the band’s original songs were written by O’Hara, whose parents were born in County Mayo, Ireland, and reflect the Irish struggles from the 1600s to modern day. “[Our music] is not the typical session music that you would find in most pubs – its storytelling, history and harmonies you don’t hear every day,” said O’Hara.

Young Ireland is based in San Luis Obispo. For upcoming shows visit www.youngirelandmusic.com. Visit www.athena.cd/ to learn more about Tergis and http://kylealden.com/ for information on the Marin-based Alden.

What Has Three Happy Endings? Showtime 2013!