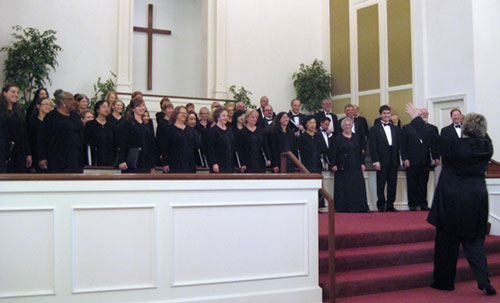 The Santa Clara Chorale winter concert struck a patriotic chord that stirred the emotions of its audiences with its “Great American Songbook” of music reflecting the history and diversity of America.

Guest conductor Dr. Lesley Leighton, Associate Conductor of the Los Angeles Master Chorale, led the Chorale with a deft hand as singers transitioned between tempos and types of music that included traditional hymns, Negro spirituals, Broadway musical tunes, and a grand finale arrangement of “America,” written by Robert Hunter for a 1976 bicentennial celebration.

The Chorale opened its tribute to American music with the lively “I’m Bound for the Promised Land,” a hymn written by a Baptist minister in England. The hymn somehow made its way to a promised land of another sort—America—and into a Methodist Hymnal in the 1800s. “When I survey the Wondrous Cross,” was a soft and reverent contrast.

Leighton got the audience clapping to the Negro spirituals “Elijah Rock” and “Amen,” songs once sung by slaves in cotton fields and churches of the old South. The cowboys (men) of the Chorale paid homage to America’s West, singing “(Ghost) Riders in the Sky: A Cowboy Legend” from 1948. Excerpts from the poetry of American Walt Whitman, who lived in the 1800s, make up the lyrics of the 1957 “Song of Democracy.”

“‘The Song of Democracy’ was so touching because I think we’re starting to lose some of that feeling for democracy. I think we’re taking it for granted,” says Judy Mason from Sunnyvale.

“I really enjoy the patriotic music they’re doing. Plus, the religious music is a very important part of our heritage,” says Sue Slavik from Cupertino.

The concert also featured solo, duet, trio, and whole-chorale renditions of songs from classic American musicals—”Mame,” “Carousel,” “Kiss me, Kate,” “The Sound of Music,” “A Chorus Line”—and the opera “Porgy and Bess.” “Blue Skies,” from the 1926 Rodgers and Hart musical “Betsy,” paid tribute to American Jazz.

“All these American songs come to Europe, too. I know my Broadway songs!” says Maartje de Heij from the Netherlands but currently living in Mountain View. “The concert has a variety of songs from mellow to upbeat. You can use all your emotions.”

“I’ve really enjoyed working with this group. They’re wonderful people who work very hard. And this is such a fantastic accompanist,” says Leighton at the end of the concert, praising the Chorale and pianist Dan Cromeenes.

The Chorale’s two performances offered a choice of times and venues to the more than 450 attendees. The March 10 afternoon concert took place at the First Baptist Church of Palo Alto. The March 15 evening concert was presented at historic Mission Santa Clara on the campus of Santa Clara University (SCU).

The non-profit Santa Clara Chorale, comprised of about 70 voices, will close its formal season with one performance only of Handel’s “Messiah,” May 4, 8 p.m., at Mission Santa Clara. The finale, accompanied by the Jubilate Baroque Orchestra, will be co-directed by Dr. Magen Solomon, interim Director of Choral Activities at SCU and Dr. David Wilson, who founded the Chorale in 1962.

The Chorale is supported by individual and corporate donations and grants, including from the city of Santa Clara and Arts Council Silicon Valley.