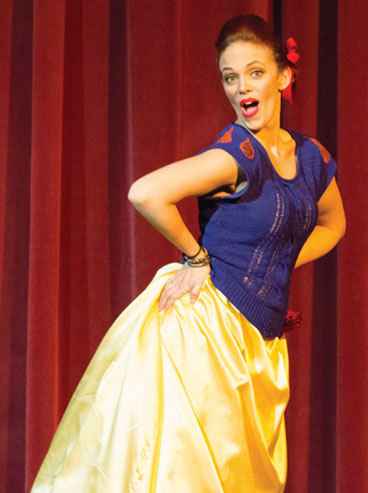 That’s what Showtime 2013 served up for audiences last weekend in “Doomstown Fractured Fairy Tales,” the story of a group of storybook-land characters displaced by a super-storm and evacuated to Doomstown – Showtime’s perennial locale for mayhem and madcap humor.

Leading the show was the trio of Princes Charming: Andrew Hyatt as the handsome original, Chris DeJesus as Harry Goodguy (a “prince of a guy” and Queen Victoria fan), and Abdullah Qureshi as the Caribbean Just Prince. Their lady loves – Snow White (Laura Velasco), Cinderella (Robin Burdick), and Red Riding Hood (Linda Clements) – were undoubtedly the most hip and assertive princesses in the history of fairy tales.

A crew of eccentric storybook folk backed them up: Little Bo Peep (Rosemary Huza), sisters Hansel and Gretel (Elaine Lewis and Hillary Brookshire) who can’t keep from arguing over who ate all the bread, a sexy Goldilocks (Carolyn Schuk), “Jackie” Beanstalk (Polly Halek), the Lady Who Lived in a Shoe (Rita Dietrich, and “it was a “reeeeeeelly biiiiig shooooooooe”) an extremely athletic Wee Willie Winkie (Arlene Rose), and a Chicken Little (John Fancher) obsessing about contemporary anxieties including the national debt and global warming.

Where there’s a natural disaster, there’s government assistance. Bev Schuler – with a sheaf of Disaster Recovery Relief Reimbursement Release forms – and former SCPD chief Steve Lodge led the “Fractured” relief effort. (Lodge’s appearance restores the Showtime tradition of having a police chief in the cast of every production.)

Showtime’s reliable bad guys are on hand to profit from others’ misfortunes with EZ Loans, disaster relief scams, and a wishing well racket. Mr. B.Ware (Pastor Bill Schulz in a somewhat different role than he plays Sunday mornings at Resurrection Lutheran Church) and Mr. B.B.Wolff (John Peterson in a yellow suit that constituted in itself a crime against good taste). The villainy is completed by an Evil Witch Queen (Char Blake) who, frustrated by Ware & Wolff’s incompetence, decides the only way to get the Snow White job done right is to do it herself. 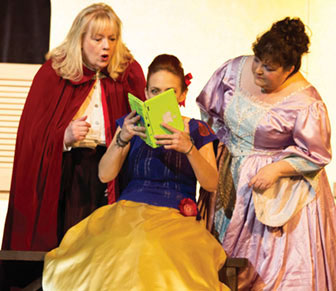 But the dastardly schemes are undone – as usual – by the untiring detective work of Sheriff Sam (Rick Mauck) and Deputy Pete (Pete Sparaco), who stop the bad guys and pave the way for the show’s storybook ending.

This year’s olios – variety acts – represented a diversity of local talent; starting with Santa Clara favorite Phil Ackerly, who opened and closed the show with his signature comic-magic act. The ever-popular Sizzlin’ Seniors dance troupe “put on the Ritz,” while the Chargerettes charmed the audience with their 1940s-style dance number, Boogie Woogie Bugle Boy.

Showtime’s producer, author and director this year was Mauck, with critical support from co-producer Burdick. Pianists Kathy Smith and Belew kept the action going with their musical accompaniment. 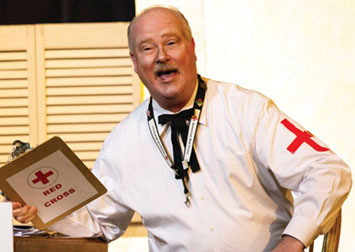 In addition to on-stage entertainment, Santa Clara Women’s League sponsored a raffle, silent auction and plenty of refreshments (including wine and beer courtesy of Santa Clara Kiwanis). Over $10,000 was raised for senior health services, according to Women’s League Treasurer Judy Busch. “A lot of people thought it was the best Showtime yet.”

At the Edge of Art History: When Art Becomes Me: Tattooing and Body Art from Ancient Times to the Present

Irish Dancing Not Just for the Irish