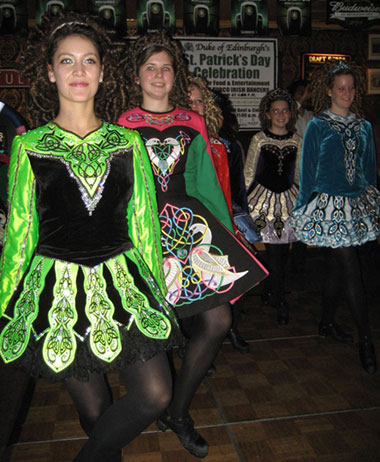 “It’s really good to see so many people who are not Irish but have an interest in Irish dance and music. It makes me proud to be Irish,” says Theresa Brien from County Down in Northern Ireland. Brien always packs her black, leather-soled set dancing shoes when she comes to California to visit her daughter.

Brien is one of anywhere from eight to 24 or more dancers who gather Tuesdays at 8 p.m. at Lilly Mac’s Irish Restaurant & Pub in Sunnyvale for live Irish music and set dancing—a social dance where four couples are arranged in a square formation, similar to square dancing.

“Some of us are full-blooded Irishmen, but we share Irish culture with all different nationalities in the group,” says Deirdre McNamara, born in County Clare, Ireland. “It’s a good social evening. We have wonderful musicians, and many of the set dances are from County Clare.”

“This is so much fun, and it’s great for beginners. If you mess up, that’s half the fun,” says Tom Egan, a fifth-generation Irish American.

“The set dances here are similar to the ones in Ireland, but the music is a little bit slower,” says Brien. Nonetheless, the dancers step, step, step and twirl until they’re dizzy in order to keep up with the tempo of the penny whistle, accordion, and fiddles of the “Fox on the Town” musicians.

“Set dancing keeps the old legs going. It’s a kind of square dancing but with harder steps,” says octogenarian Catherine Jones, who was born in County Donegal but has lived in Santa Clara since 1974. She and Harold, her husband of sixty years, hold their own with the younger set dancers, including their daughter Susan Keith, also a Santa Claran.

Irish step dancing is performed solo in competitions and performances. More than 100 Bay Area youth and teenage dancers—some with, some without Irish forebears—are enrolled at the Greene-Comerford Academy of Irish Dance in San Jose (www.greeneacademy.com; phone, 408-313-6903). School founder and instructor Sondra Greene and instructor Tony Comerford are certified by An Coimisuin, the Irish Dance Commission, which sets the standards for Irish dance.

Two academy students, high school juniors Cristina Curcelli from Saratoga and Jake Grey from Pacifica, will compete with almost 7,000 other dancers from around the world in the prestigious An Coimisiun World Irish Dancing Championships in Boston March 24-31 (www.clrg.ie).

“I had already been doing tap and ballet, but I liked Irish dance better,” says Curcelli, who has been step dancing about nine years.

“I tried soccer and didn’t like it,” says Grey. “But when I was about five, I saw ‘Riverdance.’ It’s turned into this really wonderful thing—having something you can put a ton of work into and take you places I never thought I’d be able to go to. I’ve travelled all over the world in dance competitions. The Irish people are really friendly, and I love the culture.”

Step dancing is characterized by a stationary upper body with straight arms and intricate, rapid foot movements. Either soft or hard shoes—similar to tap shoes—are worn. Girls and women wear uniquely-ornamented dresses and wigs or hair pieces. The boys and men usually wear a shirt, vest, tie, and black pants.

If you’ve ever wanted to go to Ireland, do it this year. 2013 is the year of The Gathering Ireland (www.thegatheringireland.com and www.ireland.com). Around the world, anyone with a link to, or interest in, Ireland is invited to visit and find a long-lost relative or new friend. This public-led initiative to celebrate Ireland was launched with a celebration in Dublin on January 1.

What Has Three Happy Endings? Showtime 2013!