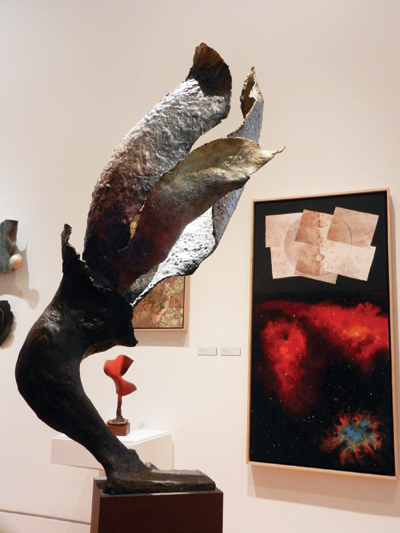 It starts in the Rotunda. Bay Area artist Harry Powers’ “From The Inward Eye” show at the Triton Museum of Art draws viewers in instantly. “Boyne,” Powers’ cast bronze sculpture pulls visitors in before releasing them to the Warburton Gallery where the rest of the exhibit is housed.

Immediately, rich, bold colors entice art and sculpture lovers to step further into Powers’ world. A maroon-painted accent wall pulls everything together. This isn’t just another exhibit; it’s another world.

Powers utilizes abstract pieces – both sculpture and painting – to give an ethereal feel to his work. Painted bronze and aluminum sculptures are placed throughout the room and canvases painted in reds, blues, and purples align the walls of the gallery. Viewers are pulled into an out-of-this-world setting and into the depths of Powers’ mind. There are misplaced faces, astrological signs, swirls, and the concept of outer space used as themes throughout Powers’ show. Each piece fits together as a whole, but stands out on its own, as it would be easy to spend hours staring at the intricacies of the designs.

While most of the pieces lay flat on the canvas, Powers uses shading to give depth to some paintings, for example, “Infinite-Energies,” where a crater appears to pop out of the background. It isn’t unless the viewer approaches that they realize it is flush with the background.

Powers’ “New and Distant Vistas 2” cast aluminum and acrylic sculpture is mesmerizing. Red, silver and blue painted aluminum has been molded in a draped effect. A gold-colored sculpture with tentacle-like arms protruding in a spherical way from the center sits atop the aluminum like a tree-topper. Perhaps it’s a testament to Chief Curator Preston Metcalf’s ability to light a show, but at certain angles, when the light hits the sculpture just right, the piece is illuminated and demands the viewer’s attention.

“My interests and curiosity are eclectic,” says Powers’ artist statement. “I incorporate any material or technique which helps articulate the work’s ideas and feelings. Often images gleaned from contemporary science combine with those using historical viewpoints. Sometimes images will be the visual equivalent of some quality or essence. It might result in abstract, or symbolic, or literal images…I seek to make work which is provocative to the viewer’s imagination, as well as richly joyful for me.”

Concerts in the Park - Cool Under Pressure