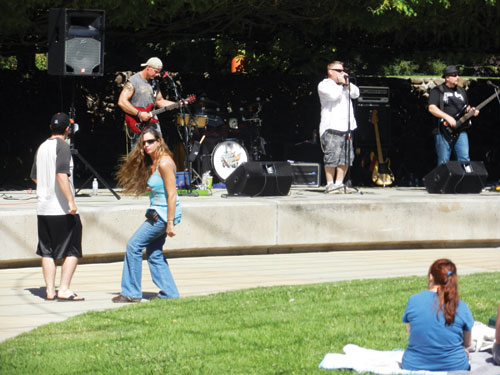 The latest Concerts in the Park brought rock band Cool Under Pressure to the Central Park Pavilion. Playing a variety of well-known tunes from the 60s through today like Tommy Tutone’s “867-5309/Jenny”, Tom Petty and the Heartbreakers’ “Mary Jane’s Last Dance”, 311’s “All Mixed Up,” and Steve Miller Band’s “Jet Airliner”, CUP kept the party going all afternoon. There was something for everyone as the band played from multiple genres and even dedicated a version of Marvin Gaye’s “Let’s Get it On” to lead singer Justin Illges’ parents and in-laws who were both celebrating wedding anniversaries. On August 5, Santa Clara’s Cultural Advisory Commission will bring bluegrass band Sidesaddle & Co. to Central Park. The concert begins at 2:30 p.m. and admission is free. For information on Cool Under Pressure visit the band’s Facebook page www.facebook.com/CUPBAND.

Dance in the Daytime Returns to Mission College