Santa Clara Mayor Lisa Gillmor is under new scrutiny this morning after she, ironically, asked Governor Gavin Newsom to weigh in on a public works case brought against billionaire developer Related Companies that, if struck down, would exempt Related from paying contractors a prevailing wage.

It’s a complete turnaround from where Gillmor was three years ago when she and her city council allies — Debi Davis, Teresa O’Neill and Kathy Watanabe — tried to break the Levi’s Stadium management contracts they approved a decade ago by claiming that the 49ers management company didn’t pay prevailing wage. This led to a plethora of breach of contract lawsuits, which were recently settled.

Despite her frequent speeches on transparency, Gillmor didn’t consult her council colleagues on the letter that she put their names on, nor did she inform them of the March 4 letter to Governor Newsom, which was sent on official City letterhead listing all the council members as signatories. 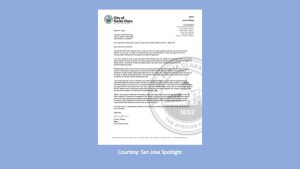 Council members told The Weekly that they knew nothing of this letter until they read about it in Spotlight.

“It was news to me,” said District 2 Council Member Raj Chahal. “The first question I have is about transparency. There wasn’t any transparency about this to the council.”

“Just because the mayor speaks for the City, doesn’t mean she can say whatever she wants unilaterally,” said District 4 Council Member Kevin Park. “We should be asked before she puts our names on things.”

District 5 Council Member Suds Jain said he was “shocked” to see his name on a letter he had no knowledge of.

“It was very inappropriate,” said Jain.

“She likes to say she’s leadership you can’t buy,” Jain continued. “That’s because she was already bought by Related long ago.”

Gillmor’s challenger for the mayor’s seat, District 6 Council Member Anthony Becker said it “concerns me that the mayor went over the council’s head and asked the governor or a favor for her campaign donor.”

“I had no knowledge of her letter to the governor until a friend called me and told me,” said Council Member District 3 Karen Hardy. “I am shocked she would abuse her position as mayor in such a way.”

This is not the first time someone has caught Gillmor playing the “do as I say, not as I do” game. She came under fire recently when The Weekly learned that her company Public Property Advisors, which manages Santa Clara Unified School District’s teacher housing complex Casa Del Maestro, hires contractors that don’t pay prevailing wage despite a state law mandating it on public works contracts.

Gillmor’s ask to Governor Newsom concerned a 2020 claim filed by the Union of Painters and Allied Trades with the California Department of Industrial Relations.

Gillmor told the governor, “…nothing in the rent structure suggests this project is a public work that would be subject to California’s Prevailing Wage Law…As the former Mayor of San Francisco, you understand first-hand how vital partnerships with the private sector are in creating opportunities that otherwise would never come to fruition.”

In her letter, Gillmor didn’t explain how this exemption would benefit her Santa Clara constituents.

The request is especially galling because Related Companies is not cash poor. The company announced just last month that it raised $690 million to help with development of Tasman East, the property adjacent to the Related development that has yet to break ground or pay rent to the City.*

For almost a decade, Related has held exclusive rights to develop the 240 acres of the Santa Clara golf course without putting a shovel in the ground. The stipulations of the contract say, only when building starts does Related have to start paying rent to Santa Clara. Without “construction” Related can continue to hold the property rent free, while gathering millions of dollars for the future development.

For almost as long, Gillmor has remained mayor of the City of Santa Clara and she has remained a close partner to Related for even longer.

The proposed Related development had its incubation in the Gillmor Real Estate office — The Weekly attended a preview of the development concept in Gillmor’s office during the summer of 2012; well before a formal proposal was made to the City in 2013.

The initial proposal was that the first phase would open in 2019, and Related would then start paying the city $1 million in ground rent, that would increase by $1.5 million when phase 2 opened, and reach about $8 million when the project was completed, which was originally anticipated to be 2035.

Gillmor blames CEQA lawsuits from San José for the delay, but other things have contributed. In 2018, Related used a force majeure to stop the clock on development because of the City’s delay in approving landfill management plans. The development will be built on the City’s former garbage dump. At that time there were also concerns about landfill toxins leaching into groundwater or buildings. Although these issues were ultimately settled, progress continues to be stalled for reasons that aren’t clear. Amusingly, Related did not enact the force majeure during an actual “extraordinary event” such as the past two years with COVID.

Throughout it all, Related Companies has been a strong Gillmor supporter and a reliable campaign donor — to candidates as well as the gray money operation run by the police union PAC.

Deceptive “letters” aren’t a new thing with Gillmor. In the last three elections, the police union PAC sent “Letter from your Mayor” mailers with an official-looking “seal of the mayor of Santa Clara” that can easily be mistaken for the city’s official seal.

* The only money Related Companies has paid to compensate the City to date is for the staff time required by the project.

**Barry seemingly had strong influence in City Hall in the late 2010s. He has business and political ties to Steve Churchwell, the lawyer hired to represent the City in a failed defense against a 2018 voting rights lawsuit. Churchwell had never litigated a voting rights case previously but took home a $1 million paycheck for his work.