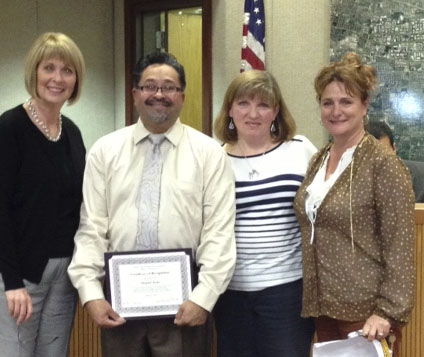 At his first job, Chef Daniel Arias cleaned bathrooms inside a restaurant. After that, he worked at a hotel where he started off as a valet. Such were the beginnings of Arias’ career in the hospitality industry, which has spanned 33 years. Since then, Arias completed an associate degree from the Food and Restaurant Management program at Mission College, and graduated from the Culinary Institute of America at Hyde Park, New York. Arias worked in restaurants for a year before he began his career as a culinary arts instructor; he has taught at Mission College for 11 years and at Wilcox High School for six years.

“I was pretty shocked when I found out I won [the FHA-HERO award],” says Arias, a Santa Clara resident. “This year, 28 teachers were honored. I was told I was picked out of 500 home economics teachers in the state. Two students at Wilcox nominated me.”

Arias was recognized at a meeting of the Santa Clara Unified School District’s Board of Education on April 25.

“[At the board meeting], I got another certificate, one that [Superintendent Bobbie Plough] prepared for me,” Arias says. “[Plough] got up and spoke on my behalf. I was very nervous. It was amazing. I’m still in awe about it.”

Arias is glad he followed his heart to go into the hospitality industry. Shortly before graduating from San Jose State University, Arias took some classes at Mission College.

“I learned a lot from Mr. Amarell, who’s retired; he taught about restaurant operations,” says Arias, reflecting on his favorite teachers. “I also like Mr. Haze Dennis; he’s still here. He taught me about food preparation.”

In addition to being influenced by good teachers he has had, Arias lives by a quote attributed to Plutarch: “The mind is not a vessel to be filled, but a fire to be ignited.” Receiving the FHA-HERO award was not the first time Arias became aware of his influence on students.

“This happened a couple of weeks ago; I was asked to read some scholarship applications here at Mission College,” Arias says. “So I’m reading an application, and I don’t know who wrote this, and it gets to the part where the applicant is talking about a teacher who was inspirational to them. They were very excited to come to Mission because that teacher also teaches here. I turned the page, and saw the teacher this person listed was me. To tell you the truth, I almost cried. I had to ask someone else to look at this application because I said there was a conflict of interest!”

Arias says that his ideal meal involves a grilled New York steak, medium rare, with mushroom sauce and crumbled bleu cheese on top, paired with a glass of his favorite red wine. For dessert, he’d go for a slice of olala berry pie. When he eats out, Arias says he prefers hole-in-the-wall restaurants over chain establishments. This summer, Arias will teach summer school at Mission College, go on some biking adventures around the peninsula, and gear up for a camping trip.

Arias’ camp-mates will, predictably, not need to worry about what they’re going to eat.