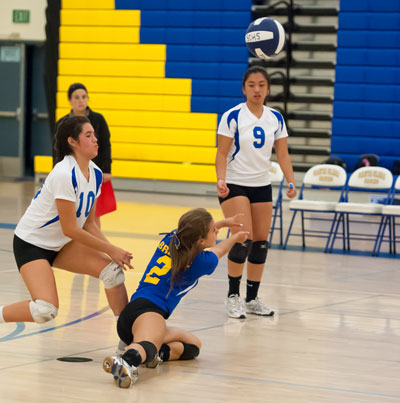 The Falcons jumped out to an early lead and hardly looked back. The Bruins’ losses can be attributed to unforced errors and miscommunication. Time and again, the Falcons were able to place the ball where the Bruins weren’t prepared to defend.

Natalie Kochanowski, Bruins’ libero (defensive specialist), tried to cover as much of the backcourt as possible, several times sprawling to the ground as she reached to cover a shot. Her all-out style of play set an example and upped the communication for the Bruins. Outside hitter, Adrianna Charvet, also dove to cover balls that were about to fall in for a point. But even with the Bruins’ extra effort, the Falcons were too well coordinated in their attack. Falcons’ outside hitter, Julia Lee, literally put on a demonstration in high jumping as she met the ball in air. The Falcons’ Katelyn Mollahan consistently set the ball up for middle hitter, Alex Ferrari. When the momentum seemed to shift to the Bruins, with excellent play by outside hitters, Hannah Fields and Chloe Mabanta, along with middle blocker, Kayla Katzman, the Falcons’ consistency kept the Bruins at bay.

Sports
Author AdminPosted on October 17, 2012
As soon as Santa Clara and Cupertino stepped onto the court, it was easy to see that the Bruins girls’ volleyball team was at...

Sports
Author Andrew BenschPosted on May 9, 2018
The Santa Clara Bruins have one more road game remaining, but they unfortunately ran into some bad luck in their home finale against the...