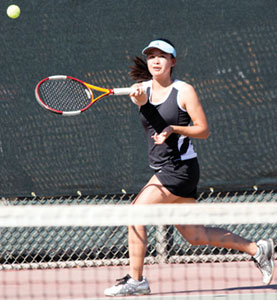 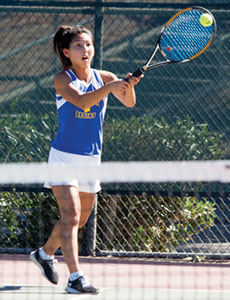 While most of the games were decided after two sets, there were two – the match between Santa Clara senior Rachel Burnette and Wilcox senior Mil Wajanakunakorn and the doubles match between Santa Clara senior Ahasbai Avila and junior Callie Burnette and Wilcox senior Emily Cook and junior Karina Louie – that needed a third set to determine the victor.

The SCHS doubles team easily beat Cook and Louie in the first set, winning 6-1, but the Wilcox girls battled back to take the second set 6-3. The pair then came up big with a couple of aces and some well-placed shots to win the third set 6-3.

On the singles side, the marathon match between Burnette and Wajanakunakorn ended long after all the other matches had finished. Burnette won the first set 6-4. The pair then battled it out for a long 9-7 second set that went to Wajanakunakorn.

Between the second and third set, first year Wilcox co-head coach Bill Barnes gave his player some encouraging words. “Just take your time, control your energy and do what you do,” he said. “Way to come back – good job.” The third set initially appeared as if it would go to a tiebreak, but Burnette was able to break serve and win 6-4.

“I’m proud of these girls, they’re good girls,” said Santa Clara fifth year head coach Julie Kawamoto. “They’ve come a long way. Most are returning, but we have a few girls that are new. Wilcox has always had solid teams. As long as the girls are playing and enjoying playing, I’m happy. They’re playing with more confidence than they did in the first match and the girls worked hard until the end.”

“I feel the ladies did a really good job,” said Barnes. “They appeared more confident than they were last time. We obviously have to work on our serves and backhands, but I’m really proud of them, especially the ones that went three sets.”

Look for next week’s game of the week as Santa Clara High School football takes on Piedmont Hills in SCHS’s homecoming game.

Sports
Author Andrew BenschPosted on July 12, 2021
“I swung as hard as I could and the next thing I know it’s flying and it’s over the fence.” That was Lucas Gandara’s...

Sports
Author AdminPosted on April 18, 2012
The Santa Clara High School Cheerleading squad took third place out of twenty teams at the USA Nationals competition, which was held in Anaheim,...

Sports
Author Melissa McKenziePosted on February 23, 2011
When Santa Clara University senior Lena Gipson tore her ACL the summer before her senior year of high school she was told she would...
SPONSORED