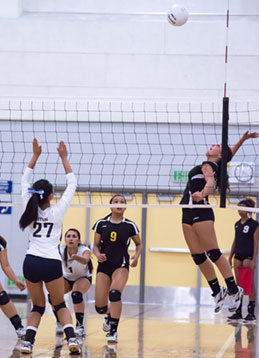 It was a rough start of the season for the Wilcox girls volleyball team.

In game one, Wilcox controlled play well. A miscommunication from the line judges allowed for a replay at 22-16. From there, two aces by senior Rianna Paiz and a missed hit by Branham’s Kasey Stanley sealed the Charger victory.

As play continued in game two, Wilcox had to fight hard for every point and made it clear that they weren’t going to go down easily. At 15-18, junior Alina Kwiatkowski came up with a couple of huge blocks to keep the ball in play, but it wasn’t enough as Branham got the Chargers on the run and put the game away.

Junior Hailey Mock had two incredibly well-placed aces in the third game – one long, followed by one short – to get Wilcox to within one at 7-8, but Branham’s Greta Varvell picked up a kill to give the Bruins control of the ball. Wilcox battled to get within one at 12-13 before a lift caused a sideout. Branham then scored five unanswered points with Stanley at serve. The Chargers crept to within three behind the serve of freshman Micalea Bataclan and hitting of senior Alyssa Parra, but two aces by Megan Fulcher put Branham ahead by five at 15-20. Wilcox was unable to recover and lost by seven.

In the fourth game, senior Nicole Brown had three kills – including a statement kill at 12-17 – one ace and two tips for points, and Mock had two kills to help keep the Chargers close, but Branham closed out the game after a Wilcox hitting error and ace by Brittany Annas.

Despite the loss, first year head coach April Lujan was proud of the girls’ effort. “They controlled their hitting and that’s what I asked them to do,” she said. “I wasn’t looking for kills. I was looking for placement and they did that for me.”

Lujan also believes that the loss was only a small setback for the team. “They’re learning a new system…last year they didn’t have a two setter offense and we did that this year. They’ve worked hard on getting that two setter offense – that’s part of the new system along with running a faster tempo offense…The girls are only going to get better. They’ve transformed so quickly in a little bit of time.”

The team’s first official practice was Aug. 16. Wilcox plays at Lincoln High School Sept. 10 (after press time) and at King’s Academy on Sept. 12. Look for next week’s Game of the Week as the Wilcox Chargers girls water polo team hosts the Lady Chargers Tournament.

Sports
Author Andrew BenschPosted on October 20, 2021
The Fremont Firebirds water polo squad finished off a season sweep of the Wilcox Chargers on Tuesday by cruising to a 6-1 win. On...