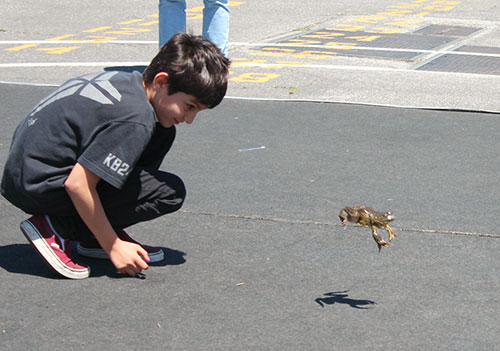 At Sutter Elementary School’s 52nd annual Frog Jump, students gathered outside at “frog pads” next to the playground. After setting down their assigned frogs–with names such as Top Hat McGee, General Hop and Vladimir Putin–students waited for their frogs to jump. After a frog’s third jump, a frog catcher swept the frog up into a net and measurers recorded the accumulated distance of the three jumps. This year fifth grade student Ruhi Tabassum’s frog Ribbeteer made the longest recorded jumps of 17 feet and 11 inches. Tabassum will be recognized at a school event in June and have the opportunity to attend the Jumping Frog Jubilee in Calaveras later in May.

“During the week, the students learned about the life cycles of the frog and frog habitats,” said Bri White, who co-chaired the frog jump with fellow first grade parent Flaviana Chelliah. “Students jump with real frogs and they’re placed on a little pad. The fifth-graders help out during the event. They act as frog handlers, frog catchers and frog measurers. 52 years ago, this tradition was started by two Sutter teachers, Mr. Bill Guzules and Mr. Lee Giudici.”

Known in the school community as “Mr. Guz,” Guzules taught fifth grade and combination classes at Sutter School for 32 years. Now in his 21st year of retirement, this Santa Clara resident still makes time to help lead the frog jump.

“There is no other school that does a frog jump but Sutter that I know of,” Guzules said. “Sometimes I meet school alum and the first question they ask me is ‘Do you still do the frog jump?’ When I ask students about their favorite thing to do at Sutter, their number one response is almost always the frog jump. No one has ever said that math or history was their favorite. “

According to Guzules, the frog jump was really the idea of Giudici, who passed away several years ago.

In past years, Guzules would catch all the frogs by himself. This year he brought three groups of Sutter School dads out to Los Banos (a city in Merced County) on three different nights near the end of April and taught the dads how to catch frogs.

“We usually start frogging about a week before the frog jump because you don’t know how many frogs you’ll catch each night,” Guzules said. “The first night it was windy and we caught 27 frogs. The second night with the second group, there was no wind. We caught 52 frogs. The third night was warm with no wind and we caught 82 frogs.”

Before the frog jump, Guzules cared for the frogs in his garage and kept them in frog barrels and wet gunny sacks.

“All those frogs are going back into my truck right after after the jump and I’m releasing them back into the same canals we caught them at in Los Banos,” Guzules said. “I got permission from the farm manager to frog in the area. They know we’re frogging for a school and that we’re returning the frogs.”