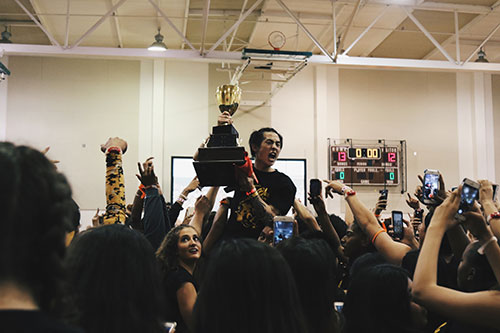 After a one-year hiatus, the Black & Blue Olympics between Wilcox and Santa Clara High schools returned to the Youth Activity Center. Fortunately, the event was a friendly enough rivalry that nobody ended up black and blue other than the artificial black and blue face paint on the respective sides of the gym.

“I perform around the Bay Area,” noted Vergano at the conclusion of the night’s festivities. “At my first competition in the Philippines, I won third place despite being the youngest contestant. I would definitely love to end up well known and be able to help charities through my voice. I want to at least become popular in the Philippines.”

Vergano says she really wants to see “Hamilton” and has dreams of reaching Broadway on her own talents someday.

After the anthem, the games kickstarted with each school performing a dance routine for five minutes dubbed “five minutes of fame.” That was followed up by more games: “blind bacon,” “skin the snake,” a water bottle flipping contest, “orange necking,” “ball pipe challenge,” a hula hoop relay, the traditional tug of war and human pyramids.

The events that didn’t need any judging ended up being evenly tied at 9 points for each school. That meant the winners of the five minutes of fame and FTW (for the win) dance numbers would decide the outcome. This is where some controversial judging came into play.

School administrators were the judges and while the Bruins were awarded three points for their FTW performance, Wilcox was awarded four points for their five-minutes-of-fame routine. That meant the Chargers won the Olympics by a single point, 13-12.

“I was a little disappointed,” commented Santa Clara’s Student-Body President Tamara Pantic. “I had seen before in the rules that FTW was three points and five minutes of fame was four points. Overall I’m not bitter whatsoever, I’m really happy with how my school turned out.”

Despite the close decision on a winning school, the friendly rivalry was certainly enjoyed by everyone involved.

“This BBO was a lot different than the ones we have had in the past,” acknowledged Wilcox Student-Body President Jo Choe. “This one was a more friendly rivalry. Though the games were competitive, we still were able to dance with each other, have fun with each other. That’s something that was very different from the past when people would get into squabbles and fights and stuff like that.”

“It’s a pretty friendly competition,” agreed Wilcox senior Paige Jones. “You get a feel of the unity, when we had our breaks everyone was dancing in the center.”

Jones also acknowledged events like this are special since a lot of the sports teams–including her soccer squad–don’t get to play each other because they aren’t in the same league.

“[The Olympics] adds to the competition because sometimes it kind of sucks that we don’t get to play our rival school even for just a scrimmage. We find the competitive rivalry through other sports and BBO.”

Special shout out to Recreation Coordinator Rich Casem for organizing and MCing the event.