Former Santa Clara Swim Club (SCSC) Head Coach and CEO John Bitter appeared in a Santa Clara County courtroom on Jan. 10 for sentencing, but a judge agreed to continue sentencing until March 27 at the request of the defense.

Bitter left the courtroom and will remain on supervised release — meaning he is not allowed to leave the country — until the next hearing. As he left the courthouse, he offered an apology to the SCSC families.

Bitter used his position as CEO of the Santa Clara Swim Club to take out a loan of more than $600,000 in the swim club’s name. He used the money to personally invest in a bar in Scottsdale, Arizona. 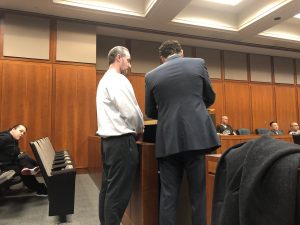 Bitter says he is working on selling the bar he purchased with the embezzled funds in order to pay the restitution.

On Sept. 26, 2019, Bitter entered a plea of no contest to felony charges of embezzlement, grand theft and forgery. He faces up to five years and eight months in prison during sentencing. If he makes the full restitution, Judge Socrates Manoukian could decide to offer Bitter a lighter sentence, possibly without jail time.

In addition to possible jail time, Bitter faces a civil lawsuit filed on Dec. 18, 2019 by SCSC. The Weekly has reached out to SCSC’s board for comment, but as of now, has received no response.

SCSC found out about Bitter’s misuse of club funds in September 2018. He was fired as head coach and CEO of the swim club on Sept. 27, 2018 and the embezzlement was reported to the Santa Clara Police Department. A criminal investigation was immediately opened.

Official charges were filed against Bitter in April. He was arrested by Santa Clara police in May and made his first appearance before a judge on May 28.

Bitter joined SCSC in 1995 as an Associate Head Coach under Dick Jochums. He took over as Head Coach in 2006 and was named CEO in 2009.